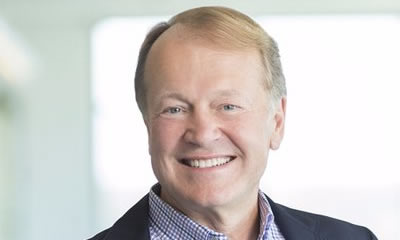 A Silicon Valley Legend
In an online installment of the Commerce School’s Centennial Speaker Series, McIntire welcomed one of the world’s most impactful CEOs and tech trendsetters, who shared his vast experience with our own pioneering alumna and the entire McIntire community.

Chambers, who joined Cisco in 1991, when it was a modest company with 400 employees, a single product, and about $70 million in revenue, recounted the rise of the company under his leadership. When he ultimately stepped down as CEO in 2015, he had built what was once a modest company into a $47 billion tech giant that was widely regarded as the backbone of the internet. During his tenure, Chambers led Cisco through the acquisition of 180 companies and turned more than 10,000 employees into millionaires.

Recognized as an innovator and industry leader, Chambers shared his expertise and leadership lessons with an engaged online McIntire viewership. In addition to recounting the many lessons he learned from a childhood through his storied career, Chambers explained his connection to the new generation of leaders. As Founder and CEO of his own JC2 Ventures, he is investing in 18 game-changing startups, helping founders become great leaders by scaling their companies; creating economic prosperity; and bettering society through diversity, inclusion, and innovation.

Chambers also drew from Connecting the Dots: Lessons for Leadership in a Startup World, his best-selling 2018 book on how to rebound from a business disaster and how to grow from setbacks.

An Inventive Alumna
Interviewing Chambers, digital media producer, entrepreneur, and patent holder Rebecca Weeks Watson asked insightful questions and guided the successful Centennial Speaker webinar. As the Founder and Producer of The Reveal Co., a groundbreaking interview series that uncovers the personal stories of high-profile business leaders, she adds to her already impressive career: With more than 15 years of experience advising and building startups, and a speaker at 50 conferences nationwide, Watson enjoys lecturing at the McIntire School and has recently started teaching a course on lean startups to budding entrepreneurs at Davidson College.

“John is a business powerhouse who rose from a salesman at IBM to CEO of Cisco, one of the largest and most relied upon companies in the world, growing the company exponentially despite two stock market crashes,” she noted. “It isn’t solely his skills that have driven such remarkable results; they’re also a product of his choices to lead compassionately and to think creatively when faced with challenges. Everyone benefited from his entertaining stories and words of wisdom.”

A Rare Opportunity
As part of the webinar, Director of the Galant Center for Innovation and Entrepreneurship and McIntire Professor Eric Martin, along with his “Managing Innovation” students, participated in a virtual Q&A session with Chambers, Watson, and the online McIntire community.

The webinar, Martin said, provided an uncommon opportunity for McIntire students and the extended University community to learn firsthand from an admired figure who has worked with business and government leaders across the globe to create opportunities to overcome society’s grandest challenges.

“By telling his unique story and accounts of industry-shaping experiences, John Chambers shared his unique view of corporate culture and innovation,” Martin said. “We were equally excited to hear about his views and enthusiasm for the international startup community and the promise it holds to effect positive change through commerce.”