As the latest example of CAV Angels' goals to instruct and mentor, the affinity group named the two McIntire students to serve as its inaugural Huston Scholars, a fellowship funded by CAV Angels members. Narula and Tucker were sponsored to attend the 2022 Angel Capital Association Summit this past May.

CAV Angels is on a mission. Or rather, the nonprofit network of alumni, faculty, parents, students, and friends of UVA is on a few.

One mission is to earn recognition among the most impactful angel investing groups in the country as they aim to energize the University community, drawing alumni from around the world to engage in the thriving UVA entrepreneurial ecosystem and attract investment in promising early-stage companies.

Just as importantly, the group is intent on providing educational programming that extends unique hands-on engagement opportunities to students ranging from undergraduates—more than 100 of whom are presently either Comm or pre-Comm—to mature executives pursuing post-graduate degrees at schools across UVA.

As the latest example of the affinity group’s goals to instruct and mentor, it named two McIntire students to serve as its inaugural Huston Scholars, a fellowship funded by CAV Angels members. The scholars, Eeshma Narula and Will Tucker, were sponsored to attend the 2022 Angel Capital Association (ACA) Summit in Atlantic City, NJ, this past May.

Rich Diemer (McIntire ’80), Co-Chair of CAV Angels, says that since the group’s membership numbers have swelled to over 400 investors and learners, they plan to make the Huston Scholars program an annual event to support its primary education mission. He also believes that, though they intend to grow undergraduate participation across the board, future selections for the fellowship will likely feature McIntire students as well.

The reason may very well be from what he witnessed during the event. Having attended the ACA Summit with Narula and Tucker, Diemer was delighted to relay just how impressed he was with the Comm students.

“They fit right in, representing CAV Angels, McIntire, and UVA in an exemplary manner. I think they were the only students among the summit attendees!” he says. “Besides attending Angel University courses in advance of the summit, they created and handed out a brochure for the Impact Fund they lead on Grounds, arranged meetings during the networking sessions, and actively participated in the Innovation Funders Showcase competition.”

Along with their McIntire education, the time that Narula and Tucker spent working with CAV Angels proved instrumental in their successful experience at the ACA Summit.

Narula admits that though she and Tucker were “definitely on the younger end of the attendees,” she says it didn’t hinder their ability to connect with the other participants. “Rather, it enhanced it. Many people approached us to ask about our interest in angel investing. They were all amazed when they heard about all the hands-on work UVA students are able to do through CAV Angels and the VVF [Virginia Venture Fund] Impact Fund.”

Both she and Tucker are involved in the VVF student org, and hold leadership roles on its Impact Fund, an initiative dedicated to supporting minority business ownership, primarily through capital investment and strategic advisement.

“It was really rewarding to represent UVA and our age group at the conference. Will and I demonstrated our genuine interest in and growing knowledge of investing,” she says.

Tucker says some were initially confused by their presence, as he and Narula received a great deal of attention, but it became an easy conversation starter about the work they are doing on Grounds. “They loved the Impact Fund and our mission statement—and some even volunteered to become VVF partners by the end of the week,” he says. 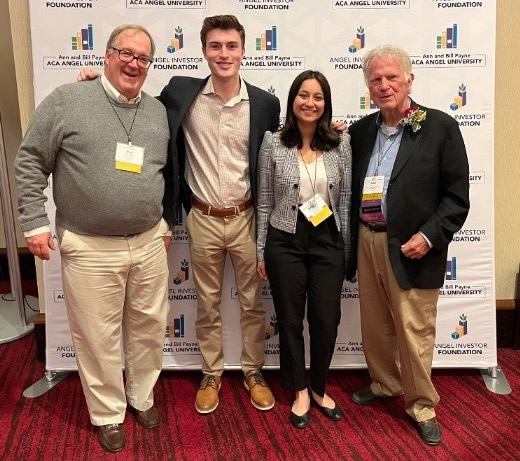 Rich Diemer, Co-Chair of CAV Angels, with Will Tucker (McIntire ’24) and Eeshma Narula (McIntire ’23), both officers of Virginia Venture Fund (VVF) and managers of its Impact Fund, along with John May, CAV Angels Educational Advisory Board member.

Their seamless integration into the proceedings traces back to some expert training they received with CAV Angels. Narula recounts that having a front-row seat to founder pitch sessions with the CAV team was extremely beneficial in preparing her to participate in the Innovation Funders Showcase competition at ACA.

“Hearing the thoughtful questions CAV Angels members asked helped me to think more critically about the 20-plus startups we looked at during the summit,” she says.

Tucker was excited to build upon his understanding of the process undertaken when investors analyze startups and to be able to interact with experienced investors. “It was interesting to hear their opinions on the most influential components of due diligence, which included the founding team, target market size, and more.”

Narula found that hearing from founders and later discussing their pitches with other angel investors at the summit was particularly eye opening: “I found it interesting how the same presentation could spark so many different questions and opinions.”

She was also intrigued by the Ann and Bill Payne ACA Angel University sessions. “They provided a great introduction to angel investing. We learned about various ways to value startups, diversification benefits, and common pitfalls. Getting to chat with session leaders afterwards offered us the chance to get our questions answered and learn even more,” she says.

Tucker remarks that the workshop sessions were “incredible,” detailing how they absorbed the nuances about startup funding options such as convertible notes, SAFE notes (simple agreement for future equity notes), and revenue-based financing. “Watching individuals with years of expertise debate the pros and cons of these methods was great.”

Also valuable: the summit’s Impact Investing Dinner. “It was delightful to dine with intelligent and diverse individuals and discuss a topic that we are all passionate about,” Narula says.

Serving as CAV Angels’ first Huston Scholars has enhanced Narula and Tucker’s overall learning at the Commerce School, and as such, they intend to use the experience to support their work in the VVF.

“The specific framework we learned for valuing pre-revenue startups is helpful, and I look forward to sharing it with younger members in VVF,” says Tucker. “The Impact Fund will especially benefit from this material, since we mainly target pre-seed and seed-stage ventures.”

Narula insists that attending the conference has been one of the highlights of her McIntire years thus far. “It was really exciting to meet people from all across the country and discuss a shared interest. It was also a complete joy to meet John Huston’s wife and son,” she says about getting to know the family of their fellowship’s namesake. “They spoke of how much John Huston valued education and sharing knowledge, which made us feel really proud to be there.”

Tucker also felt fortunate to meet members of the Huston family. “They described his discipline as an investor, and how he never let personal biases affect decision making. John not only did research, but also ‘me-search’ to recognize his own preconceived notions about a company. Going forward at McIntire, I’ll connect this approach to my coursework.”

Diemer notes that the choice to honor Huston was a logical one, as the 1967 UVA alum was a longtime member of CAV Angels’ Educational Advisory Committee and undergraduate classmate of CAV Angels Co-Founder Dick Crawford (A&S ’67, Darden ’75, Law ’75). “He was very active at the Angel Capital Association, and it seemed a natural thing to do in his memory. Dick seeded this year’s grant, along with one of our members who also knew John well through ACA and his activities at Ohio Tech Angels.”

Explaining that though the ACA has stressed an intention to bolster their educational programs, Diemer says the association hasn’t targeted students. That’s where CAV Angels can step in to fill the gap for interested learners. “With the democratization of investing, we look at CAV Angels student members as the angel investors of the future,” he says.

The longstanding lesson about investing that they’ve learned as Huston Scholars, Tucker points out, will come from remembering the importance of thinking through investments using a rational approach that also acknowledges their preexisting biases. It’s a principle that Huston stood by and one that Narula and Tucker have internalized.

“We were proud to go to the ACA Summit under his namesake, and future generations of Huston Scholars can carry the legacy of learning,” says Tucker.