Though she's known around Rouss & Robertson Halls for her expertise in brand strategy and promotional strategy, Professor Carrie Heilman is no stranger to the challenges student athletes face. The former All-Patriot League honors college basketball star is set to represent the University and serve as the faculty liaison between the academic enterprise and the athletics department. 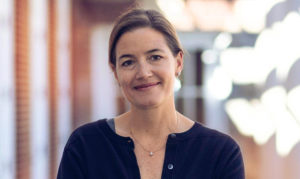 In this role, Heilman will help to ensure that the University establishes and maintains the appropriate balance between academics and intercollegiate athletics and will represent the University at meetings of the Atlantic Coast Conference and the National Collegiate Athletic Association. She will also serve as the faculty liaison between the academic enterprise and the athletics department.

“Growing up, sports were such a big part of my life—it was kind of my identity, being an athlete,” she says. In fact, Heilman, who played softball and basketball in high school, was good enough on the court to win an athletic scholarship to the College of the Holy Cross in Worcester, Mass. There, she won All-Patriot League honors as a senior.

When Heilman saw that the University was looking for a new faculty athletics representative, she jumped at the chance.

“I’ve really enjoyed the handful of opportunities I’ve had over the years to be involved with the athletic department here,” she says. “So when this opportunity came up, I knew it would be a challenging role, but I thought, ‘What a great opportunity to get involved with athletics again.’”