Group sought to expand and strengthen University’s ties in the region. 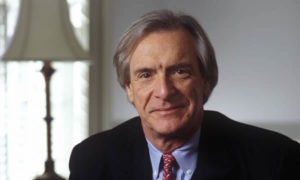 “The dynamic nations of Asia are powerful players in the world economy and critically important partners in the provision of a first-rate global education,” says Zeithaml. “Through this extended trip to the region, we met with alumni, parents, students, and friends to strengthen our relationships with them; to establish and expand mutually beneficial academic partnerships, exchange programs, and collaborative research projects; and to raise the general profile of the University and its outstanding schools and programs.”

Sullivan and her team also traveled to Beijing, where she and Stam spoke at Tsinghua University about “How Universities Can Educate Leaders for a Changing World,” as well as to Tokyo, where Sullivan delivered a talk on the growing role of American women in higher education. Sullivan, along with U.S. Ambassador to Japan Caroline Kennedy, also participated in a roundtable discussion about global citizenship with students at the city’s Sophia University.

Starting in Singapore
The trip’s first stop was Singapore, where Baucom, Sullivan, and Zeithaml addressed alumni, students, parents, and friends at the UVA Club of Singapore on the subjects of the University’s global activities, the upcoming Bicentennial Celebration, as well as plans for ensuring the University’s enduring excellence and relevance amidst the challenge and change of the coming century.

“Singapore is an absolutely appropriate location for discussing the future of the University and furthering developing strong ties to the region,” says Zeithaml, who also participated in a public panel discussion hosted by Singapore’s National Institute of Education. “As we seek to provide UVA students with an education that will prepare them to meet the challenges of tomorrow, it is critical that we provide them with the global skills and perspectives so much on display in this city—and that we continue striving to create the positive, productive Asian and international partnerships that will foster such skills and perspectives.”

To Hong Kong…and Beyond
Baucom, Sullivan, and Zeithaml then moved on to Hong Kong. Sullivan and Tony F. Chan, President of The Hong Kong University of Science & Technology, were the keynote speakers at an Asia Society-hosted event titled “From University to Success in the 21st Century.” The event was followed by a UVA Club of Hong Kong reception and panel involving the UVA trio focused on University and higher education issues. Finally, this same UVA contingent also spoke and participated in another panel at a large alumni, parents, and friends event in Shanghai. Like the other events, the Shanghai event included a number of new UVA students who will join the University in the fall semester.

Zeithaml says the importance of such meetings, which help to engage the region’s important and expanding alumni, parent, and student population, can hardly be overstated. “As Asia’s global influence continues to grow, the establishment and maintenance of strong ties with our Asian and Asia-based alumni are critical to the University’s continued success in a competitive global educational context,” he says. “Our alumni serve as invaluable connections and ambassadors to—and experts in—this dynamic and influential region of the world.”

Zeithaml, who has more than 25 years of experience teaching, educating executives, and consulting in China, also serves on the International Advisory Board of Lingnan (University) College, Sun Yat-sen University in Guangzhou. In addition, he has published his research on global strategy issues in leading academic and professional journals and co-authored several cases focused on firms in China and Southeast Asia.

Visiting Friends
While Stam and Sullivan continued on to their engagements in Beijing and Tokyo, Zeithaml and the McIntire team headed to Guangzhou, where they met with key Lingnan faculty members and administrators, as well as toured the college’s student housing and facilities. Students in the new M.S. in Global Commerce Program, set to welcome its first class of American, European, and Asian students in fall 2016, will spend nine weeks studying “Global Financing and Operations” at Lingnan.

“Our visit to Lingnan, where we met with our outstanding partners and colleagues, served as a terrific finale to our highly productive trip to Asia,” says Zeithaml. “We welcome our partners at Lingnan into the global McIntire community and hope that the M.S. in Global Commerce Program—and the cross-cultural collaboration, goodwill, academic excellence, and shared values that it embodies—will serve as a model for schools and organizations around the world.”