Fourth-year McIntire student and Echols Scholar Tyler Walker says he always knew he wanted to major in economics—before even considering himself a pre-Commerce student. Now, as recipient of the prestigious 2019-2020 Lenox-Conyngham Scholarship, Walker will attend Cambridge University’s Trinity College next academic year, building his independent research skills while pursuing an M.Phil. in Economics. 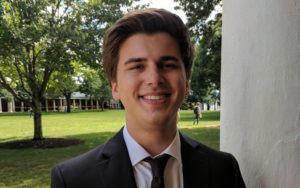 Fourth-year McIntire student and Echols Scholar Tyler Walker says that he always knew he wanted to major in economics—before even considering himself a pre-Commerce student. He credits a high school AP course in the subject with piquing his interest.

Now, as recipient of the prestigious 2019-2020 Lenox-Conyngham Scholarship, Walker will attend Cambridge University’s Trinity College next academic year, building his independent research skills while pursuing an M.Phil. in Economics.

As a Finance and Information Technology concentrator who simultaneously majored in Economics while concentrating in Public Policy in his second degree program, Walker believes that the opportunity for continued scholarship will connect well with his McIntire coursework and previous experiences.

“I really believe in the scholarship’s emphasis on combining the practical disciplines provided by the Commerce School with a liberal arts education,” Walker says. “While economic study can be used for policy solutions, companies can also tackle economic problems in the marketplace.”

He sees plenty of potential applications at Cambridge for extending what he learned studying Economics at UVA, adding that some of the most impactful classes for him focused on economic inequality, development economics, and urban economics.

“I believe all of these disciplines offer important insights that are growing increasingly relevant in a more globalized, stratified, and urbanized society,” Walker says, noting the immense importance of economic thought in not only government policy, but also in being an informed citizen. “In my M.Phil. program, I hope to further explore these areas in my research to better understand policies that can help address the challenges these areas pose,” Walker says.

“Tyler is an outstanding student with a stellar academic record,” says McIntire Assistant Dean of Global Affairs Chris Elliott. “He was admitted without conditions to the M.Phil. in Economics course at Cambridge—an academic achievement that is rare and reserved for the very best students in a truly global pool. Then Trinity College is simply an iconic residential college experience within the University of Cambridge, so we are enthusiastic for Tyler that he will be able to join the distinguished ranks of our Lenox-Conyngham Scholars.”

Walker’s academic excellence throughout his Commerce and Economics programs also extends to Business Analytics and Entrepreneurship Tracks, the latter of which he says has been integral to expanding his thinking and ideating more creatively.

After venturing to San Francisco on McIntire’s annual Digital Safari trek during the spring break of his third year, Walker said that visiting tech firms and startups changed his point of view and exposed him to an unfamiliar conception of corporate culture.

The experience also solidified his interest in the subject.

“I can’t recommend Digital Safari enough,” Walker says. “It not only offers the unique experience of visiting many of today’s most important companies and seeing how developing firms work to build their business models, but it also the opportunity to be exposed to an entirely new environment and mindset.”

Outside of the classroom, Walker assumed leadership roles as vice president of finance and project leader for the Virginia Consulting Group, as a project leader for Student Entrepreneurs for Economic Development, and as a teaching assistant for “Quantitative Analysis.”

Walker also served as a peer tutor at McIntire, focusing on finance and accounting. He says the experience was rewarding because it allowed him to give back to the McIntire community while developing relationships with people he believes he probably would never have otherwise met.

“The old adage that the best way to learn is to teach others is also definitely true, and I encourage current third-years to apply to the program next year,” he says.

Walker’s time at McIntire has provided him with the practical skills that will enable him to hit the ground running when he takes on the position of Associate Consultant with global management consultancy Bain & Company after the 2019-2020 academic year.

“During my summer internship at APT, I was able to leverage skills I learned in ICE communications—like memo writing and tips for emails—that I really think allowed me to stand out among my peers,” he says. “I left my internship wanting to build more skills in analytics, and McIntire allowed me to fulfill this goal through courses I’ve taken this year in SQL, Business Analytics, and Excel VBA.”

Walker credits the recruiting resources at McIntire with procuring his internship and future position at Bain, since he says he took advantage of Commerce Career Services’ sessions during his third year to prepare for the case interview process.

After meeting with Bain & Company representatives on Grounds, he found that he connected with the firm’s values, its encouragement of entrepreneurial thinking, and its social impact enterprises. Walker mentions that throughout the interview process, he met with many members of the company’s Washington, D.C., office, who provided tips for the challenging case interviews. Ultimately, he found himself connecting with the interviewers, and accepted the position.

“The company’s programs were also extremely generous for furthering my education,” Walker says. The deferment frees him to earn his master’s degree and to take full advantage of the all-expenses-paid scholarship, which includes a stipend for summer travel before the start of the program.