This Centennial Year, we honor our past, present, and future. This article was originally published Feb. 21, 2019. Rambert Tyree is a J.D. Candidate at the University of Virginia School of Law. 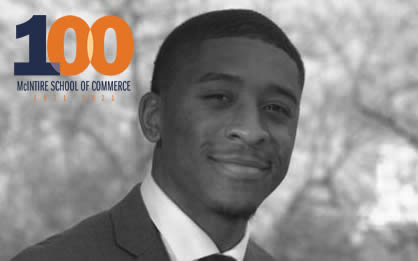 A Management concentrator, who serves as Diversity and Inclusion Chair for Commerce Council and interns in McIntire’s Office of Diversity, Equity, and Inclusion, Tyree reached out to see if there could be yet another role for him.

After checking in with a connection he had made through the Meriwether Lewis Institute for Citizen Leadership with someone currently working in the president’s office, he earned a position in the newly formed task force as the student representative.

The committee has been hard at work in advance of Ryan’s release of his strategic plan. And though Tyree will be graduating from McIntire in May, he’ll still have the opportunity to witness some of the results of his efforts.

Starting UVA Law School in the fall, the Newport News, VA, native says, “I’ll still be here for three more years. Hopefully, I’ll reap some of the benefits of the strategic plan and get to see things come to fruition.”

We sat down with Tyree to ask him about his experience serving on the committee, its connection to his McIntire studies, and his drive to create a more inclusive environment across Grounds.

What are your duties as a member of President Ryan’s Strategic Planning Committee?
The committee is made up of faculty and staff from across the University along with people from the Engineering School, the Medical School, and the University hospital system. But I’m the only student on the committee. My role is to seek out feedback, information, and recommendations from other students. Dean of Students Allen Groves (Law ’90) is on the committee, and he also serves to represent the students, but my role is more of the student perspective.

What short-term and long-term goals has the committee established so far?
A few weeks ago, President Ryan released his official vision in a video in which he gave a breakdown of what he thought would further the University as a whole, so we’re fulfilling that vision. We’ve been working through the process. The first step was to gather information to see what students, faculty, and community members think is most important. While we haven’t established any official concrete goal, we’ve gathered a lot of data.

Now we’re using that data to try to decipher what we should target next. The goal is to take those ideas we gathered and use them to implement the president’s vision for the future. So for each proposed solution that we feel is attainable, we’ll create a two-pager about why the idea will work, whom it will benefit, and how to best go about it. We’ll present the ideas to President Ryan that we believe he’ll find to be the most impactful.

How did you go about collecting student feedback?
I sought to garner formal and informal feedback from students. One way I did that was by just having conversations with people, asking them things like, “What do you think is important?” “What we should focus on?” and “How could we make the University better?”

I also tried to have formal sessions in which I talked to groups. For example, I went to a University Judiciary Committee weekly meeting. I spoke for just a few minutes to set the scene, and then had the students speak. They talked among themselves, and then they had a person appointed to respond from each group. I was able to garner a lot of feedback about how to address certain issues, which I brought back to the committee. That allowed us to compile a database of the feedback. We had over 2,000 responses from community members.

What topics have been most important to students?
Some of the most prominent are to be expected. We received a lot of feedback on diversity and inclusion. How can we make the University a more inclusive place, especially in the face of a lot of heavily racialized events in the recent past? That’s been a huge resonating theme. Also housing, which is always something that comes up. Many people have had ideas and suggestions about how to improve the overall housing situation for third-years, fourth-years, and grad students.

Has the committee connected with what you’re learning at McIntire?
I think the biggest components of the Management concentration is leadership and teamwork. As I’m working on a committee with many diverse interests, the Management concentration has helped me to solidify how to work in a team to achieve a greater goal. Though the concentration is more related to employment and finance, I have been able to use a lot of what I’ve learned about collaborating with a larger group to meet organizational goals. It’s been really useful.

I’m currently taking “Work Motivation and Strategic Performance Management” with Professor Gary Ballinger. Even though we’re just getting started, the course has already been helping me to find my own personal leadership style and to learn more about how to operate in a team setting. With a committee of 12-15 people, it’s important to know how you best operate and navigate that space. Lessons we’ve learned in his classes thus far have definitely been applicable in some of our committee meetings.

I’m also taking a public speaking course with Professor Marcia Pentz, which has helped, especially because I’m in a situation where I’m the only student involved and the youngest person in the room. It’s helped me to shape how I phrase certain things or present an idea. Moving forward, as we begin to present these ideas on a larger scale, it’ll help with how I’m distributing the ideas that we’ve come up with together.

What has it been like contributing as an intern in McIntire’s Office of Diversity, Equity, and Inclusion?
I’ve been really active. I’ve been working with another intern in the office, Johnny Membreno (McIntire ’19), and we’ve created the “Building Bridges at McIntire” event. It’s a lunch series in which we paired up students throughout the Comm School—everyone from third-years to graduate students. Our idea is to introduce people from totally different backgrounds and different concentrations. Mixing international students with local Charlottesville student residents and people of different interests to really help facilitate this diverse community that’s all together interlocked. We feel that the best way to create relationships is just by sharing a meal—without any designated topics. Just to talk about each other’s lives and what they like. Hopefully, they learn something from each other and gain a different perspective.

The series just started this month. It took a lot of work to pair everyone together. We initially expected to have maybe 15-20 responses and that I might need to fill out some lunch pairs myself. We ended up having 105 responses! We’d love to do it again in the future—if not this semester, then maybe they’ll continue it next semester.