Wilhelm says he’s trying to help Finance and non-Finance students to better understand and intelligently debate about how to lead a moral life in the financial industry and its peripheral sectors. 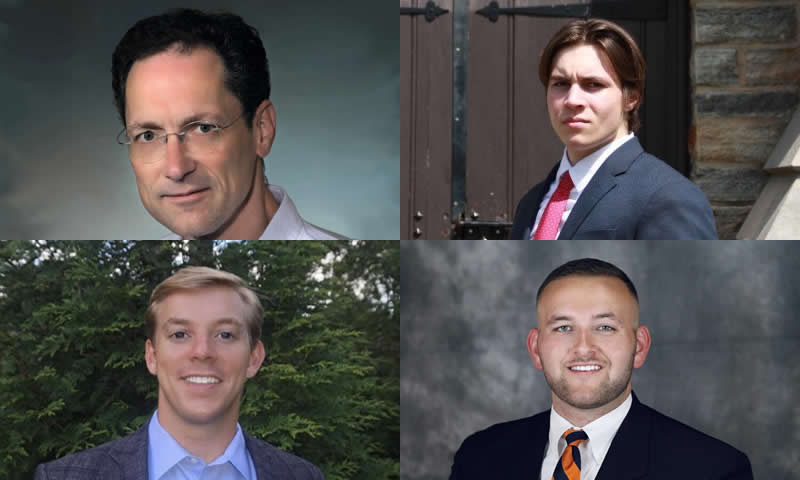 When the 2008 financial crisis hit, McIntire Professor Bill Wilhelm believed that the situation exposed shortcomings of financial markets and our market economy that deserved criticism and warranted more effective regulation. Yet he recalls how his concerns were at odds with what he was hearing from the financial industry, government agencies, legislators, and even the general public.

“It seemed like we were all talking past one another,” he says.

Because financial markets occupy such a critically important space that is simultaneously powerful, extremely convoluted, and central to the economy, Wilhelm says that type of misperception around it that he experienced is typical. “Even seemingly sophisticated parties struggle to communicate with one another. This is a serious problem that extends well beyond the financial markets.”

It’s a problem that Wilhelm has been interested in for decades. During most of his 20 years at the Commerce School, he taught a course dedicated to investment banks and their more convoluted practices. The class, which he led at Oxford for five years before coming to Grounds, examined the how and why of these practices, their evolution, and their purposes. Its subject matter connected to his research in the area, focused chiefly around the idea that the majority of facets concerning the intent, advice, and assets the finance industry develops and trades are in response to imperfections in financial markets and the market economies in which they operate.

And as the 2008 crisis revealed, position and power can be used by those in the industry to exploit those market imperfections for personal gain—often at the expense of their trusting clients and society.

“In many instances, it’s quite difficult to judge whether their actions serve client interests, a greater good, or simply their own interests,” he says. Those complications only add to the confusion that clouds the aforementioned discussions about the finance industry—for those directly involved in it, and those who have their money entrusted to its operation. In short, it impacts nearly everyone.

Because of the significance and challenges inherent in understanding public debate about financial markets, Wilhelm is doing his best to teach undergrads to make better judgments through COMM 4559: Finance & Society.

“My goal is to help students better understand my little corner of the world by building a basic comprehension of market economies, financial markets, and their role in society at large,” he says.

Indeed, the seminar-style course Wilhelm designed for a broad student audience probes the moral conflicts, technical intricacies, and rampant temptations in finance, largely through discussions that develop students’ ability to use economic, legal, and moral reasoning. Finance & Society prepares undergrads—students majoring in everything from pre-Law, Economics, and Public Policy to Comm students of all stripes—to think and respond more effectively to markets that Wilhelm calls “complex, opaque, and prone to human error and misbehavior.”

Grayson Buki (A&S ’24), an Economics and Statistics double major, says he was already drawn to finance when he reached out to Wilhelm about the course. He was weighing different career possibilities in the industry when he reviewed the syllabus. The topics and readings got him excited, and although he hasn’t decided on his career direction, the course provided “important ethical lenses to analyze any path I choose,” he says.

Buki notes that while the course didn’t change his personal ideology, the ideas discussed in class gave him many opportunities to put himself in the position of those who hold different beliefs. It also allowed him to seriously examine core ethical questions.

“This class really helped me understand that you don’t have to go about finance without having your own kind of moral compass. It got me thinking about applying ideas to transactional ethics and how it’s so zero sum, and if that’s the name of the game, how can you participate in finance so that you’re not taking advantage of someone else’s lack of knowledge?”

Zach Schwertz (McIntire ’22), who had been interested in finance since taking a magnet program for Leadership, Government and Global Economics in high school, says that the program’s ethics seminar was highly influential in his development, and that Wilhelm’s course mirrored many of the topics he studied in it. He was immediately interested.

“Further, I was drawn to the course for an opportunity to explore business and finance from a more holistic perspective. The opportunity to discuss the overarching societal mission of finance and its role in producing efficiency and utility for internal and external users piqued my interest beyond the technical skills I had garnered in other finance-related coursework,” the Investment Banking Analyst at Greenhill & Co. says. He was also hoping to develop skills that would serve him as an informed, well-rounded finance professional who was better prepared to evaluate ethical dilemmas in the real world of finance.

“Professor Wilhelm’s course expanded my perspective and amplified my experience at UVA from virtually all angles of my education,” says Schwertz. “Not only did the course material provide broader societal context to the other Commerce courses I had taken, but the material also helped cultivate a new lens through which to evaluate all issues and topics within the subject of finance.”

Economics major Martin Weisz (A&S ’22), now a Portfolio Quality Analyst at First Republic Bank, had some experience at McIntire through his coursework in the Entrepreneurship Minor, but he was heartened to find that Finance & Society was open to non-Comm students. It would also provide the type of intellectual challenges he was seeking. “I was going to be working in financial services as a career, and by taking Professor Wilhelm’s class, I hoped to gain a better understanding of the field as a whole,” Weisz says.

Admitting that he came to the course with limited knowledge of the financial services industry, he credits the experience with giving him a wider and more in-depth understanding of the many different aspects of it. “Professor Wilhelm provided a comprehensive breadth of finance through the readings and financial literature assigned throughout the semester; they are not your run-of-the-mill financial journal articles,” Weisz insists, explaining that reading and discussing the analytical essays and real-world data on topics that had been foreign to him expanded his knowledge greatly.

Despite the fact that the course is called Finance & Society, Weisz points out that Wilhelm ties in much more than strictly high-finance-focused material and its lengthy glossary of terminologies.

“We were able to unpack the morality and societal impacts that certain financial transactions and systems created as a class. The course is set up as an open forum, where a different student or student group leads the discussion topic for the class, preparing different talking points while also providing clarity on potentially difficult items,” he explains. “This course allowed us an opportunity to craft persuasive arguments and formulate strong opinions alongside our classmates, all while delivering feedback to one another. It taught me how vital it is to listen to the opinions of your peers and realize that it is important to be aware of the impact your actions will have on society.”

Schwertz says that the most essential lesson regarding his own career concerns the idea that “true change and progress towards a more just and fair financial system begin at the individual level.”

“It not only begins with a sense of individual courage and willingness to stand up for what is right, even in challenging situations, but also, and more importantly, a passion and determination to encourage others to do the same,” he says.

“What is right” is not always readily apparent, nor are justifiable solutions typically “one size fits all,” Schwertz adds. “Ethics and the exploration of the fair, just, and good are fluid, ever-changing topics that require continued discourse, curiosity, and adaptability.”

Those ethics are often tied to information. And for Buki, the course left him realizing that not only is finance data-driven, but that having access to data can factor into the success or failure its participants.

“The asymmetry of information is really important. No matter what I do in finance, there will be opportunities for me to at least pause and consider the impact of my decisions,” he says, noting that Wilhelm’s course underscored possible motivating factors such as increasing an employer’s profits, advancing a career, as well as a host of other reasons. He says that the course raised questions he had never thought about and that the open-ended structure of discussions led to many eye-opening conclusions.

“It removes the idea that people should be as competitive as possible in finance without thinking for a second about what the repercussions of their actions are—both legally and morally. That’s where this class is strongest,” Buki says. “Whether or not students go on to take these things at their face value is one thing, but it does force everybody to at least consider that there is life beyond the zero sum.”

Wilhelm says he’s trying to help Finance and non-Finance students to better understand and intelligently debate about how to lead a moral life in the financial industry and its peripheral sectors. And for non-Finance students, he hopes to clarify the purpose of financial markets to shed light on why some seemingly “bad” behavior may actually may not be so.

“The sort of moral reasoning that we exercise in the course can be applied to a wide range of professional settings,” Wilhelm says. “It is equally important that future policymakers, politicians, and those who wish to influence them have a clearer understanding of the purpose of financial markets so that they are in better position to hold members of the industry to account.”