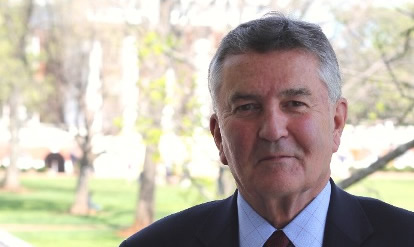 The prestigious award, established by the Chamber of Commerce in 1975 to recognize outstanding citizen contributions to the greater Charlottesville area, is named in honor of Paul Goodloe McIntire, whose goodwill set a standard of service that others through the years have reached for while helping to weave a fabric of selflessness that continues to provide for our community and its citizens.

“This award is given to a person who has made extraordinary contributions to the Charlottesville community, and Bill certainly fits this criterion,” said McIntire Dean Carl Zeithaml. “Perhaps his only area of greater contribution is his decades of service to the School and University.”

“Bill Kehoe has been an exemplary leader in our community for more than two decades,” said Chad Zakaib, Vice President at Legacy Hospice and 2015 Chairman of the Chamber Board of Directors, who also serves as 2016 Chamber Awards Recognition Committee Chairman. “Bill has worked diligently, quietly, and very effectively on some of the most impactful initiatives in our community. Our Chamber is honored to recognize Bill.”

Kehoe has received numerous academic accolades, most recently the 2015 Jefferson Scholars Foundation Faculty Award for Excellence in Teaching, and made a lasting impact on his students. In presenting the Seven Society Recognition Award, the Society noted Kehoe’s willingness to help students and cultivate their minds: “You have done more than instruct, you have imparted life lessons and gained the respect of many. As Carl Jung aptly described, ‘One looks back with appreciation to the brilliant teachers but with gratitude to those who touched our human feeling.’ Pleased be assured the University is both appreciative and grateful for your tireless contributions.”

A former student and Kehoe nominator wrote, “Bill was the professor who changed my life. He inspired me to find out how good I could be. I was a middling student until I took my first Marketing class from him at McIntire. I then went on to the Kellogg Graduate School of Management at Northwestern University, where after graduation I had … a long career in healthcare. I am now the CEO at … a Colorado based startup that is growing rapidly.”

In addition to his service to McIntire and the University communities, Kehoe has been active in numerous area organizations, including the American Heart Association of Charlottesville; the Charlottesville Regional Chamber of Commerce; the Charlottesville Symphony Society; Junior Achievement of Central Virginia; the Albemarle County Police Foundation; Rotary; United Way – Thomas Jefferson Area; and the Piedmont Virginia Community College Foundation, among others. Kehoe served on the boards of directors of many of these organizations in leadership and chairmanship roles, including the Chamber Board of Directors, for which he was Chairman in 1990. He is also a member of the Chamber Cabinet of Past Chairpersons & Presidents.