McIntire Professor of Management Amanda Cowen is one of nine professors across Grounds to receive a 2017 All-University Teaching Award. 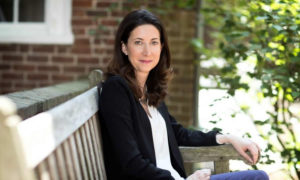 McIntire Professor of Management Amanda Cowen is one of nine professors across Grounds to receive a 2017 All-University Teaching Award. The honorees were officially recognized at an April 27, 2017, banquet, held in Alumni Hall.

The Office of the Executive Vice President and Provost issues a call for nominations for the prestigious awards each fall. The winners received cash grants of $2,000 to work on teaching projects.

In nominating her for the honor, McIntire Dean Carl Zeithaml wrote that Cowen’s teaching innovations now have a worldwide impact since she designed the first module on international corporate governance for McIntire’s new M.S. in Global Commerce Program, a one-year program that allows students to live, study, and work together on three continents at three top-ranked schools—the McIntire School, ESADE (Barcelona, Spain), and Lingnan (University) College at Sun Yat-sen University (Guangzhou, China). All 59 graduate students in the program, who come from 14 countries, wanted to write letters supporting her for the teaching award, Zeithaml added.

Another colleague noted that Cowen had already set the standard for the School’s new master’s program with her “Doing Business in Brazil” undergraduate course, “by perfectly balancing academic rigor with practical preparation for the abroad experience.” Students often describe the course, which includes a weeklong immersive experience in the South American country during spring break, as “transformative.”

In her teaching statement, Cowen reveals that early in her career, she avoided sensitive issues in class because she was concerned that she couldn’t resolve these for students, but that she came to see her role as “modeling for students how to participate in, and learn from, difficult conversations in an authentic way.”

“I believe this, too, makes students better critical thinkers and, ultimately, more effective in the organizations they will go on to join and lead,” she said.