McIntire Alumnus Is on a Mission to Reduce Veteran Suicide

ClearForce, a cybersecurity company started by alum Tom Miller (McIntire '89), identifies veterans who may be at higher risk of suicide.

Unfortunately, some of this “stuff” has the potential to create stress, which can lead to people putting themselves, their employer, or others in harm’s way.

But what if you could identify some of the stressful “stuff”–such as financial, legal, or personal problems–and intervene before it’s too late?

This is the idea behind ClearForce, a Vienna-based cybersecurity company that McIntire alumnus Tom Miller created in 2016.

Initially, the company protected organizations and employees from insider crime, specifically focusing on the behavioral factors associated with crime.

Today, ClearForce has grown to include fraud prevention, workplace safety, reputational risk, and most recently, suicide prevention. In that vein, one of ClearForce’s main missions is to reduce veteran suicide.

Retired U.S. Air Force Gen. Craig McKinley, who spent 38 years in the military, most recently as Chief of the National Guard Bureau at the Pentagon, has witnessed firsthand the benefits of ClearForce.

“The platform, in a very professional way, using ready evidence that is in the public domain, can identify people to commanders, like I was, before they get into a situation where they see no other way out other than suicide,” he said. 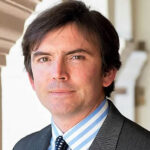 “This was a perfect primer for the students to tackle the privacy and security issues of dealing with a large amount of personally identifiable information, as well as the moral and legal issues of using big data, to effect real-world outcomes,” said Lewis, who serves as McIntire’s Assistant Dean for Technology and Operations.

In the course, students devised a privacy and security plan for ClearForce’s behavioral risk-management platform to pitch to the Department of Veterans Affairs.

“I gained some invaluable experience and insight into consulting–delivering a high-quality solution to a client in a short amount of time with limited information,” said Chris Kim, a second-year student from Fairfax.

To learn more about ClearForce, UVA Today caught up with Miller, a New Jersey native and former member of the UVA wrestling team who graduated from the McIntire School in 1989.

Can you explain how the support for veterans works, and why you personally feel like this is such an important thing to address?
Although I am not a veteran myself, ClearForce is a team built of veterans, including many of our employees and board members. Today, 18 to 20 veterans die each day by suicide, and 70% do not have contact with the [Department of Veterans Affairs] at the time of their death. Reducing veteran suicide is an important mission for our nation and has become a passion for our company.

ClearForce helps to dynamically prioritize outreach and communication to veterans. At ClearForce, we proactively discover in real time the public health factors that may indicate a veteran is more likely to need additional support at that point in time. This enables a conversation before they are in crisis and provides access to the support they need when they need it the most.

Can you give an example of a public health factor that ClearForce discovers in real time and how that facilitates a conversation with a veteran?
The CDC and the VA have determined that half of suicides are not directly related to a medical or clinical condition, and the VA does not have contact with 70% of the 18 veterans who die by suicide each day. In a 2017 landmark research report, the CDC identified certain categories of public health factors that correlate to higher incident rates of suicide, including substance abuse, financial problems, legal problems, relationship issues, and a lack of connectedness (loneliness). In subsequent studies and reports, the VA and Department of Defense have confirmed these findings.

Within each public health category, ClearForce discovers these “social determinants” and events from public record sources of information and securely processes patterns of events to enable timely outreach through one of the VA’s current outreach programs or a local Veteran Service Organization.

Here is a simple example: If, in the last six months, a veteran had two arrests for a DUI, his/her car was repossessed and he/she got divorced–that individual is obviously under a lot of stress. That’s not to say that for these reasons alone they are likely to die by suicide; however, if you had resources to proactively call that person, you would certainly want to do it sooner rather than later.

The outreach call from the VA doesn’t need to go into detail, and the VA caller doesn’t have to know any of the specifics, other than the normal helpful outreach to communicate engagement and resources that are available to all veterans. This is all about dynamically prioritizing those veterans who may need help, based on the science of the social determinants. It is also about shifting the burden from veterans always having to take the first step and ask for help to a model where the VA is proactively reaching out in a more timely way to a veteran who may need help. This is what we call flipping the model.

How did you become involved with Bryan Lewis’ class, and what specifically were you hoping to accomplish with the students?
Since we founded ClearForce, we have partnered with the University multiple times to support its students. We have created internships, externships and hands-on analytic projects. I have worked with the Career Center to speak with students about cybersecurity jobs and supported résumé reviews and career days.

Most recently, we partnered with Bryan on a capstone project for undergraduates in his cybersecurity class. Given the significance of our work on veteran suicide, we provided our solution as the case study. Fifty students broke into three teams and then presented their recommendations on policies and procedures to enhance cybersecurity and the effectiveness of our solution.

Our team was very impressed with the outstanding quality of work and presentations and will directly benefit from the students’ recommendations and research.

How did your own experience as a student at McIntire shape you?
Academically, I concentrated my degree in Finance and Marketing, and then professionally spent most of my career fundraising venture capital for startups and early-stage analytic and technology companies.

I attribute McIntire’s commitment to teamwork and interaction to the lifelong relationships and friendships formed with classmates. I also gained an appreciation for the importance of providing students with real-life business examples and challenges and would certainly recommend that other Virginia businesses identify opportunities to participate with McIntire’s students.

Long term, what are your goals for ClearForce?
We are a purpose-driven company. From day one, we set out to solve big, important problems related to people-based risk. Our goal is to become the leading global platform for behavioral analytics and risk management, and we will measure our success based on our impact on the safety and security of communities and organizations. Our company has deep military DNA, and our work in veteran suicide prevention has become both a passion and a great example of how our contributions can have a positive impact on our communities.