A Deliberate Approach: Alice Tomdio (M.S. in Accounting ’09) of PwC

We recently spoke with Alice Tomdio about how she has combined her beliefs and her experience to excel in both professional and personal aspects of her life, how McIntire prepared her for her career, and how she intends to approach her future.

In support of the McIntire School’s mission to promote a diverse and richly competitive workforce across the business marketplace, we are committing to highlight important achievements of women working in the financial services sector. According to Forbes, women comprise nearly half of financial service employees but account for only 15% of executives, despite the fact that women investors routinely outperform their male counterparts. Furthermore, financial data company Preqin has found that only 9% of private equity investment team positions are held by women, and that only 4% of women on hedge fund portfolio management teams ever reach senior investment roles. At McIntire, women represent 43% of the average class at enrollment, and 33% choose Finance as a concentration, with the financial services sector offering some of the highest paying jobs for new Commerce graduates. Dedicated to transforming and elevating the finance industry, the McIntire School provides a robust educational foundation for our students interested in the field. 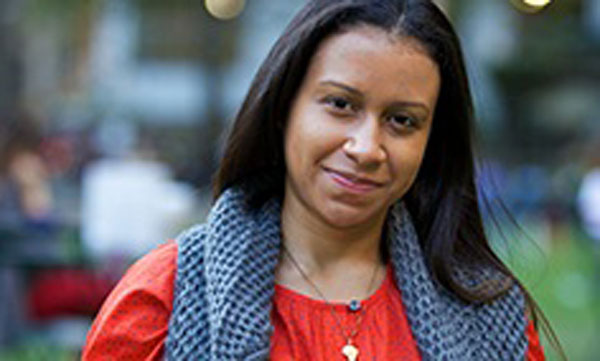 Alice Tomdio has over nine years of experience working in client service advisory roles and serves as Director for PwC’s Capital Markets Services group. Her wealth of experiences with the firm has taken her from positions in New York, London, and Johannesburg to her current location of Lagos, Nigeria.

Her primary focus is to work with companies preparing for and completing a public equity or debt offering, facilitating many local and international transactions, including the $800 million IHS high-yield bond issuance. Tomdio has also been a trusted source of advice and technical help to regulators, governments, exchanges, development financial institutions, and multilateral financial organizations on all facets of establishing and developing a robust capital market.

As one of the primary authors of PwC’s annual “Africa Capital Markets Watch” series, she regularly shares her insight on equity and debt capital markets activities on African exchanges and by global African companies. She also leads PwC’s partnership with the London Stock Exchange Group for the Companies to Inspire Africa program, highlighting high-growth private companies across the continent.

We recently spoke with Tomdio about how she has combined her beliefs and her experience to excel in both professional and personal aspects of her life, how McIntire prepared her for her career, and how she intends to approach her future.

What philosophy or vision drives you in your career? What’s most important to you?

My professional life has been defined by deliberate moves. I made the decision a while back to be strategic in the way I approached my work and my life. These decisions, while oftentimes uncomfortable, have taken me all over the United States, London, and now to more than 10 countries in Africa, working out of Lagos. The deliberateness is based on a fundamental belief in the idea that the net effect at the end is that my life has been consequential.

For my life to be consequential, I have to continuously test the limits of my mind.

I don’t believe in the idea of “settling down” or the status quo. For my life to be consequential, I have to continuously test the limits of my mind. I have to open myself to new experiences and never stop learning. My hunger for knowledge, for example, is translated into the books I read, my podcast selection, and the people I follow on Twitter. I also believe a healthy body is a healthy mind, so I push the limits of my physical abilities. When I moved to New York in 2010, I went from barely running a mile to now having completed multiple marathons. After suffering a sprained MCL last year, I am now back to running, playing flag football in a local league for strength training, and yoga to protect me from further injuries.

How did your time at McIntire help to prepare you for the jobs you had during the earlier part of your employment history?

The totality of my experience at McIntire was phenomenal, from playing flag football and inner tube water polo for the first time, to unpacking the Bank of America and Merrill Lynch deal at length in class. I also didn’t expect the level of support and motivation I received from my professors, especially Roger Martin. He played a pivotal role in defining the career I now have. There’s a common thread in a lot of the experiences I valued the most: They opened my mind and forced me to think differently and critically, which was key as I went on to the one-year Financial Accounting Standards Board Postgraduate Technical Assistant program (FASB PTA), and eventually to PwC’s Deals practice in New York.

What stays with you from the Comm School in your work with PwC?

Prompts such as “why,” “what,” “how.” Across all my classes, we were always challenged to think beyond the status quo, beyond the rules. We were really made to stop and think hard. Then there’s the leadership experience. This can come from anywhere, but for the first time, in my early 20s, I was made to think through how I could make a difference, even in my field of accounting. This is actually what pushed me to seek the nomination to the highly coveted FASB PTA program upon graduation. This way of thinking has stayed with me since.

Did you have long-term plans to work in Africa when you first launched your career in the United States, or did you move in response to a specific opportunity? What were the biggest differences in your work life that you noticed in Nigeria?

I was born and raised in Cameroon, in Central Africa, to a Ukrainian mother and Cameroonian father. While I identify as mixed race, Cameroon and Africa have been a big part of my life. So when I joined PwC in New York almost nine years ago, I had long-term ambitions to move back to the continent.

Six years with PwC’s Deals practice in New York and London gave me the opportunity to grow my knowledge and skills by working on some of the world’s largest transactions such as the restructuring of AIG and the IPO of Zoetis. I was intent on exploring opportunities where my technical skill set could add developmental value, particularly in driving capital flows through the capital markets. So when the opportunity arose to support in the growth of PwC’s capital markets practice in Lagos, I raised my hand.

What business challenges do you find unique to Africa and most of your efforts at PwC?

Other than South Africa, the market capitalization-to-GDP ratio of most African markets trends below 30%. Nigeria, one of the largest economies in Africa, had a market capitalization-to-GDP ratio of only about 10% in 2017. This suggests that several capital markets in Africa are not representative of their broader economies. Most exchanges in Africa have fewer than 100 companies listed. So one of the key challenges I’ve faced in my field of work is adapting to a market where there’s an apathy towards listing. I have essentially had to reinvent myself and be agile by leveraging my experience so as to add value in this environment. For example, I’ve spent a lot of time assisting companies in assessing their level of readiness to go public, and in many circumstances, assess liquidity options beyond an IPO (private equity investment, strategic investors, etc.).

Can you speak to how being a woman has or hasn’t played a role in your education or your career?

Of course being a woman has played a role in my education and career. However, I will acknowledge that the issue of gender diversity is now perhaps more hotly debated in the context of women’s careers.

I was a young professional in New York when Sheryl Sandberg released her book, Lean In, elevating the discussion on gender diversity to new heights. Watching Michelle Obama say that Lean In does not always work was shocking: two influential women openly disagreeing on what we as women have to do to move up that ladder. Never has the conversation on the role of women in society been so amplified. And it is not just a row with the existing patriarchal power structure; it is an intra-women debate too: who we are and our place in the world.

Today, as a senior woman in my organization and in the capital markets space, an industry dominated by men, I am being more proactive about being a visible leader. I understand how important role modeling is and that seeing people who look like you doing things you never thought you could can inspire others. I am also a lot more vocal about pushing and pulling other women in my ethos—I am very, very deliberate and unapologetic about this.

What advice can you offer for any current female students interested in accounting or considering relocating to Nigeria or elsewhere in Africa?

I am avid follower of all things [American author] Cheryl Strayed. I tend to defer to her on subjective matters. She has a way of breaking down what seems like complex life decisions into very simple questions and obvious choices. She tends to lean towards risk taking. She’d say that there’s incredible power in saying “yes.” It opens your mind. It leads you towards new and different paths. It makes you brave. So for anyone interested in accounting and/or considering a relocation, do it. Life is too short to overanalyze what we already feel in our hearts is the right decision.