From the Centennial Archives: A Shocking Turn: A Commerce Discovery with Austin Ricketson (McIntire ’21)

This Centennial Year, we honor our past, present, and future. This article was originally published Dec. 10, 2019. Austin Ricketson is a fourth-year student at the McIntire School of Commerce. 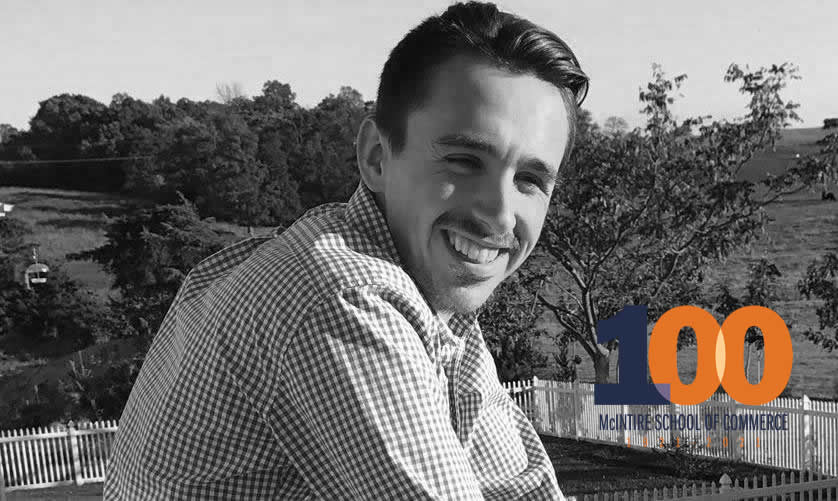 The first time third-year Austin Ricketson (McIntire ’21) walked the halls of the McIntire School of Commerce, it was not as a newly matriculated student, nor was it as a prospective student on a tour of Grounds. Ricketson’s introduction to Rouss & Robertson Halls was as an electrical apprentice, a first step in a career he chose to pursue after graduating from high school in 2013.

As the Crimora, VA, native eagerly dove into his apprenticeship, the more time he spent at McIntire observing the high level of engagement between students and faculty and noticing the real-time industry news promoted around the School—and the more he considered switching gears from the career trajectory he and his family expected for him in order to pursue his degree.

“I saw the various boards with stock information and news updates [in Rouss & Robertson Halls] and became interested in finance. I have always been interested in business news, and seeing the boards encouraged my learning,” he says.

Switching Gears
After working for several years as an electrician, and with an increasing interest in the world of business, Ricketson consulted his coworkers about leaving his job to pursue higher education. He was met with mixed responses.

“I received positive reassurance from my closer colleagues, who encouraged me that I was taking the right steps in continuing my education,” Ricketson says. Conversely, many of his other coworkers tried to convince him to stay on his former career path.

Ultimately, Ricketson chose to end his time as an electrician and enrolled at Blue Ridge Community College. He spent the following two years earning credits towards his degree before he transferred to UVA and applied to McIntire.

“The Integrated Core Experience program is a lot to process at times. I felt like I was extremely organized at Blue Ridge Community College, but I became so used to the structure there that the transition to McIntire has challenged me,” he says.

Ricketson is overcoming the newfound difficulties of balancing an intensive academic workload by learning to manage his time more efficiently. He also credits his early career experience and his perspective for the success he’s had thus far.

“As an electrician apprentice, I was taught that an individual never knows as much as they think they know. I thought I knew the electrician processes and procedures, but I found out shortly after finishing my apprentice course that there was still so much I didn’t know,” he explains. “When I began at McIntire, I decided to approach learning with an open mind and remember that while I earned my spot in the School, I still have so much to learn from peers, professors, and visitors.”

Faculty Makes the Difference
Ricketson cites the McIntire faculty and their open-door policy as a highlight to his time in the undergraduate program. He’s enjoyed taking classes ranging from strategies and systems to finance and organizational behavior, in addition to learning how to quantitatively research investments.

“The Integrated Core Experience has been an amazing experience. I have learned so much about business,” he says. “I enjoy thinking critically about the developmental strategies that go into a business and how the business can be most efficient and profitable.”

Looking forward to the future, Ricketson hopes to secure a role in project management, working for a firm focused on sustainability in the construction and energy sectors. And given the right circumstances, he hopes to eventually pursue graduate studies.

“Thomas Jefferson believed learning is a lifelong process and it never stops,” Ricketson says. “There is always something you can learn from someone.”