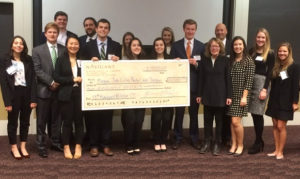 Playing the roles of Navigant consultants, eight student teams advised a travel publication that had discovered inflated circulation claims and consequent advertiser overbilling on how the publication should inform the advertisers of the inflated charges, provide restitution for the damages, and preserve relationships to encourage the advertisers to buy space in the future.

McIntire Professor Cynthia Fraser, faculty adviser for the Consulting Group at McIntire, which plans, organizes, and hosts the annual event, said the Navigant-McIntire Case Competition is an excellent opportunity for students to learn more about consulting and to realize the value of the skills and knowledge gained in the Integrated Core Experience, McIntire’s innovative third-year curriculum. The event also gives the officers in the student organization valuable experience as management consultants, she added.

“McIntire thanks Navigant for its longstanding commitment to and engagement with the School, and offers particular thanks to this year’s team of Navigant consultants—Jonathan Anderson, Helen Ardila (McIntire ’16), Katie Gaver (McIntire ’12), Brian Gray (McIntire ’09), Jeff Green (McIntire ’88), Matthew Shopp, and Pamela Werly (McIntire ’08)—who offered their time, insight, and expertise to once again make the competition an amazing learning experience for students,” she said.