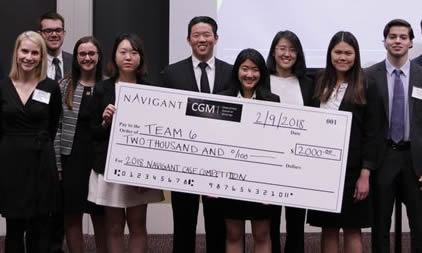 Playing the roles of Navigant consultants, student teams advised a course of action for life insurance investment firm Vortex, which had been injured by a firm that had been contracted to procure policies for Vortex to purchase and invest and that was charging inflated prices, to the detriment of Vortex. The winning team’s analysis identified the extent of damages and recommended several options for proceeding, including negotiation, mediation, or litigation. The team cautioned Vortex to either strengthen the contract for future business or consider termination of the arrangement.

“McIntire thanks Navigant for its longstanding commitment to and engagement with the School, and offers particular thanks to this year’s team of Navigant consultants—Helen Ardila (McIntire ’16), Brooks Berry, Katie Gaver (McIntire ’12), Jeff Green (McIntire ’88), Kevin Loeffler (McIntire ’13), Steve LaPenna, Alex Rossi (A&S ’16, M.S. in Commerce ’17), and Jack Schryber—who offered their time, insight, and expertise to once again make the competition an amazing learning experience for students,” said McIntire Professor Cynthia Fraser, faculty adviser for the Consulting Group at McIntire, which plans, organizes, and hosts the annual event. She also recognized Berry and Rossi for coordinating with CGM, LaPenna and Rossi for the case debrief, and CGM president Katie Henslee (McIntire ’18) for promoting the competition, resulting in 12 teams participating in the event.