The “Shark Tank”-style investment pitch event yielded one of the highest amounts pledged by investors to date: a total of $1.3 million in potential capital raised across ventures. 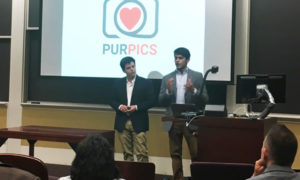 Students present at the Galant Challenge.

This year’s Galant Challenge, the McIntire School of Commerce’s “Shark Tank”-style investment pitch event, yielded one of the highest amounts pledged by investors to date: a total of $1.3 million in potential capital raised across ventures.

The April 26 event, hosted by the School’s Galant Center for Innovation and Entrepreneurship, featured a series of exceptional pitches selected from dozens of submissions, each with personal or professional ties to the UVA community. Initiated in 2012 by Center Founder Mark Galant (McIntire ’80), Founder and CEO of Tydall Trading LLC, the Galant Challenge showcases compelling new companies and offers entrepreneurs the opportunity to connect with critically important funding. Just like the “Shark Tank” TV show, after striking a deal and hugging the entrepreneurs, the judges perform further due diligence to validate the company’s projections.

“Every year, the deals just keep getting better from a potential funding aspect,” Galant said. “I used to think that was because we opened up the competition to alumni, but this year, three of the five groups were undergrads!” he explained. “Last year, all the deals were from alumni and have subsequently increased nicely in value. However, I’m even more bullish on this year’s crop of startups.”

This year’s Challenge included a variety of innovative tech ventures:

Aecium was launched by a Virginia Tech team that earned its Galant Challenge entry by winning the American Evolution Innovators Cup at Charlottesville’s 2018 Tom Tom Festival.

“We were excited by the range of concepts presented to the selection committee from around the world by the UVA community,” said McIntire Entrepreneurship Professor and Galant Center Director Eric Martin. “Each of these companies has the potential to impact the world in some way—through the use of advanced AI, the expansion of legitimate cyber-currency use cases, grassroots engagement in intentional charitable giving, improved and lower-cost diagnostic testing, and so on.”

In addition to Galant, the panel of investors included Jim Cheng (Darden ’87, Georgetown University Law Center ’02), who is Of Counsel at the law firm of Lee and Hayes and works with several private equity and angel investment firms; Rich Diemer (McIntire ’80), who serves as Senior Director at global boutique investment banking and consultancy firm Seale & Associates and as Co-Chairman of the Board of CAV Angels; and Brian M. Rogers (McIntire ’84), who is Managing Partner at Elliott Sidewalk Communities.

During the live event, the five teams each gave a 10-minute pitch, during which they discussed the market opportunities, competitive concerns, and next steps for their ventures. They then spelled out the amount of capital they were hoping to raise from the investor-panelists—“the ask”—and exactly how it would be applied to propel their startup to the next stage of growth.

For judge Rogers, the decision to invest in Pinkaloo was easy. Like him, the company is Baltimore-based, and the entire platform is rooted in making intentional charitable giving easier and more accessible—a topic in which Rogers is deeply interested.

“My own life changed when I made a commitment to intentional giving. I’m delighted to be involved in the Galant Challenge and to have found a company, Pinkaloo, whose mission so greatly aligns with my own,” Rogers said. “I view this challenge to be a win-win for me in particular but also for all the investors and ventures.”