An Inside Look at the M.S. in Accounting Community

I was initially nervous about attending the M.S. in Accounting Program because I felt like I was beginning my freshman year of college all over again.But on my first day at orientation, my fears went away, as I immediately felt like a part of the UVA and McIntire communities. 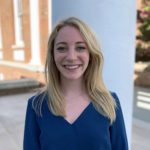 I was initially nervous about attending the M.S. in Accounting Program because I felt like I was beginning my freshman year of college all over again. Since I did not attend UVA as an undergrad, I was anxious and excited to start the new school year and meet my classmates.

On my first day at orientation, my fears went away, as I immediately felt like a part of the UVA and McIntire communities. I met my classmates and professors, and toured McIntire, and it felt like I was where I was supposed to be. At the end of the first week of class, the Program also participated in a team- building activity, which helped us all to get to know each outside of McIntire and develop bonds as a group. Throughout this semester, we have enjoyed getting to know each other by supporting the Hoos at football games, exploring Charlottesville, going to group dinners, and more.

Here are a few of my favorite memories so far.

Hanging of the NCAA Championship Banner

As a huge basketball fan, I was so excited to be at UVA and experience the excitement firsthand. During the first few weeks of class, a group of students attended the hanging of the championship banner at John Paul Jones Arena. We watched as the team was presented with championship rings and listened to Coach Tony Bennett as he talked about the team’s journey to victory. We even got to hold and take pictures with the NCAA trophy! We were all so excited to part of this historic moment and can’t wait to see where this season goes! 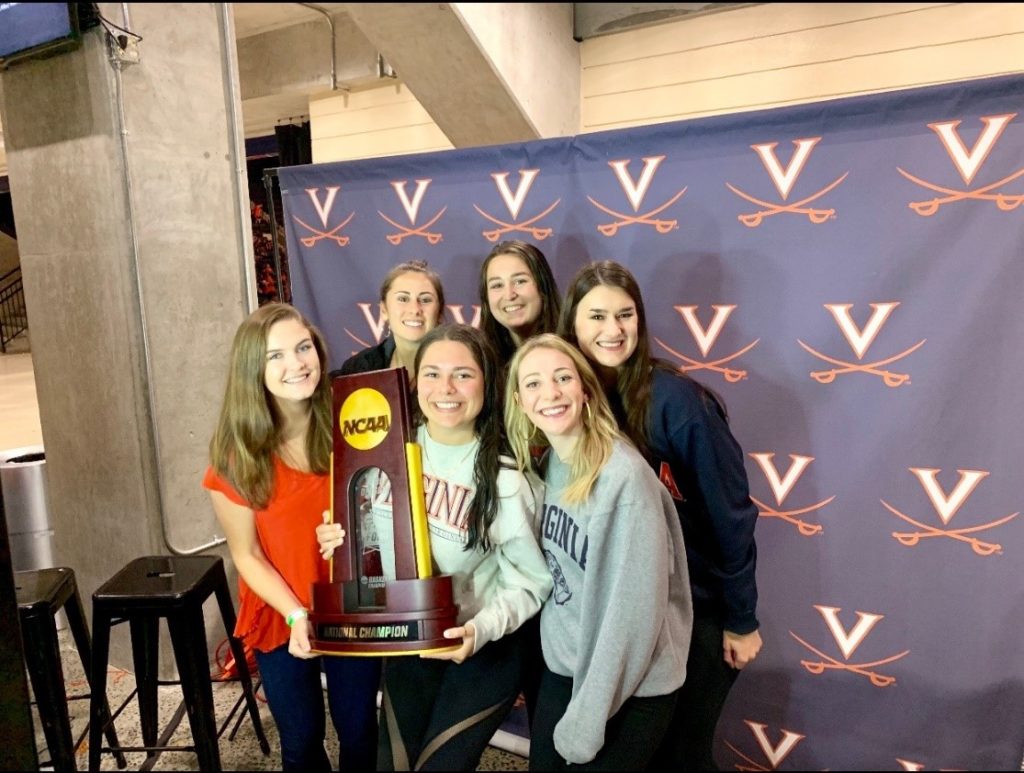 M.S. in Accounting students with the NCAA trophy at the ceremony to hang the national championship banner.

Since I attended a small school as an undergrad, I had never experienced going to big football games. So far, we have attended every home game together as a group. It has been so much fun cheering on the Hoos in Scott Stadium with all the UVA fans and (finally) learning the lyrics to the “Good Old Song.” We have even stormed the field upon victory. 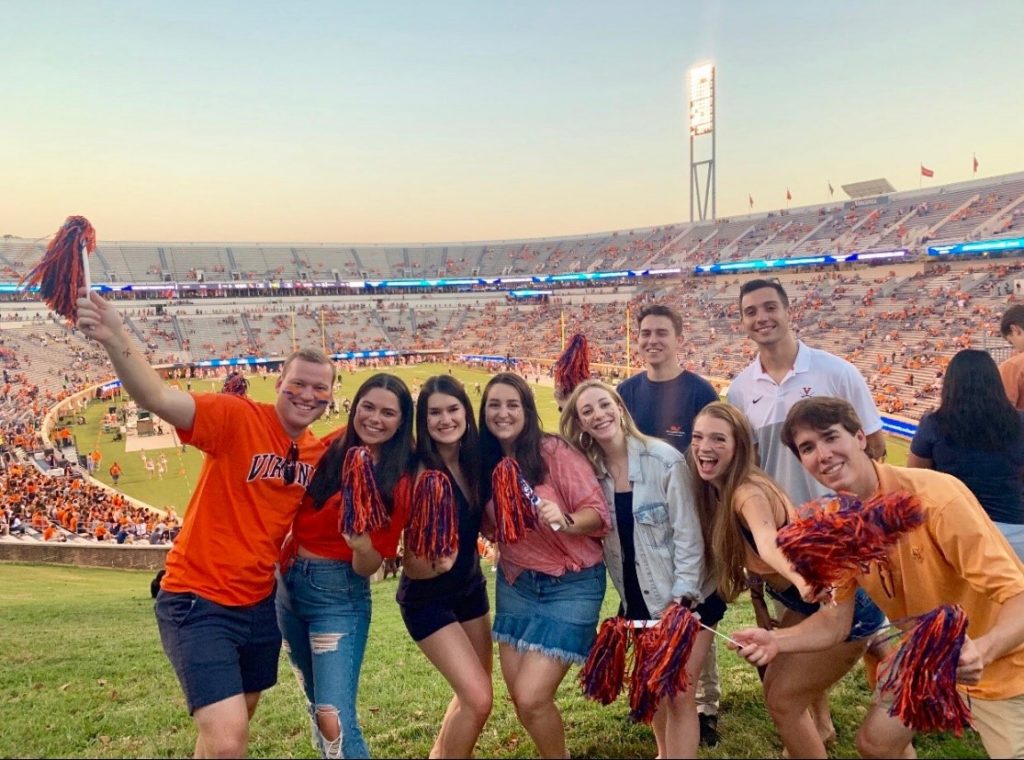 M.S. in Accounting students at a UVA football game this past fall cheering on the Hoos!

So far, my favorite memory has been watching the sunset at Carter Mountain Orchard. We ordered a dozen apple cider donuts (they are a must!), listened to live music, and watched the sunset over the Blue Ridge Mountains. We sat on a picnic blanket on the side of the mountain and got to see the most incredible view of Charlottesville. It was an experience I will never forget, and it was one of the moments when I realized I felt at home in Charlottesville. 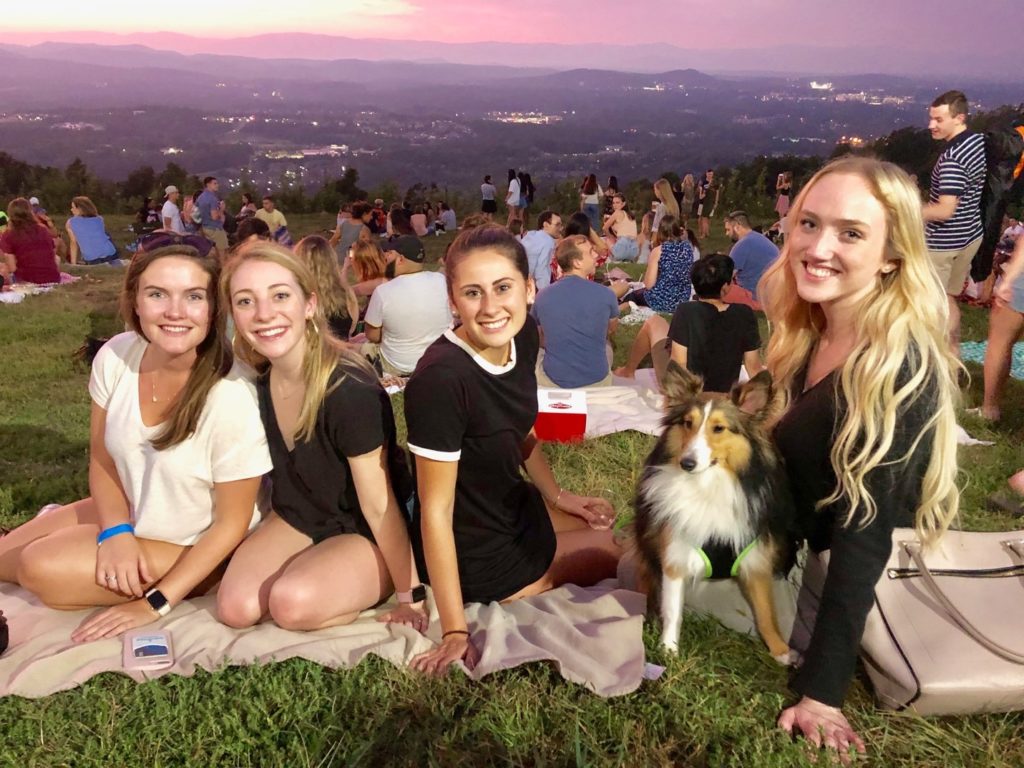 Macy (second from left) with other M.S. in Accounting students at the Carter Mountain Sunset Series.

I am so thankful to be a part of a program that is so accepting and supportive, and we are ultimately one community. I cannot wait for the rest of the year and exploring what else Charlottesville has to offer!