From Student-Athlete to Analyst: Hunter Davis (M.S. in Commerce ’20)

Former student-athlete and M.S. in Commerce grad Hunter Davis reflects on moving from the ballpark to the boardroom.

In the spring of 2019, it was all about earned runs and strikeouts for Hunter Davis. A pitcher on the Duke Blue Devils baseball team, Davis enjoyed a high-profile student-athlete lifestyle, balancing his undergraduate coursework with competing on a top-notch Atlantic Coast Conference team.

“It was pretty straightforward how I ended up at Duke,” Davis said. “I visited once, and they wanted me to come play. I felt like I’d be messing up if I didn’t take it because I probably wasn’t going to make my parents more excited or find a better place.”

The Atlanta native found himself in Durham, studying Economics due to his interest in Finance.

“At Duke, they have a lot of liberal arts majors, so Economics was really the closest thing,” Davis said. “Econ was one of the busier majors; it had a different rhythm, with more consistent work.”

While college student life is already busy, adding in the demanding schedule of a Division I student-athlete forced Davis to figure out how to manage his time.

“The most valuable skill I got from being a student-athlete is being able to do work even when the timing is unfortunate,” Davis said. “Nobody wants to be doing work in a hotel room on a Saturday, but sometimes that’s what I had to do, and getting used to that was a big takeaway going into the program at McIntire.”

In his senior year of college, Davis was thinking about what came next. Although he wasn’t able to continue on with baseball after college, coming to McIntire provided a sense of comfort and familiarity that helped fill the void that baseball left. 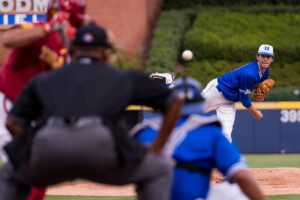 “I have an older sister who went to UVA, and she did the M.S. in Commerce Program as well,” Davis said. “My dad had done law school there too, so hearing them talk about it and how much they loved it, I thought I would love to get the chance to spend some time in Charlottesville. It seems like a pretty special spot to them and I felt like it was a really fortunate opportunity to be able to go to McIntire and spend some time in Charlottesville myself.”

Davis applied to the M.S. in Commerce Program at the earliest possible deadline and received his decision before baseball season picked up, giving him plenty of time during the spring semester to focus on his sport.

“It was a great spring because I didn’t have to worry about anything else other than really baseball,” Davis said. “Already being accepted to McIntire made things a lot easier.”

After playing out his senior year and reaching the NCAA tournament with his team for the third time in four seasons, Davis was looking to adjust to life as a graduate student and put baseball on the back burner for the first time in his life.

“The reason I wanted to come to McIntire was really because I had no job experience,” Davis said. “I had just played summer baseball, so I had no internships and was not really aware of or that eager to be in the professional world yet. I felt that the M.S. in Commerce Program was a really good way to prepare me for that in general. Everything you have to do for classes and group work, there was a higher level of expectation than in undergrad, and that was something that I needed.”

At the start of the program, there were plenty of things to get used to as a student in the Finance Track, but with his experience as a student-athlete, Davis was used to adapting to the situation at hand.

“The daily get-up-and-get-going aspect of the program, going to the early classes, that was pretty comparable to athletics,” Davis said. “We were kept pretty busy, with multiple things going on at once.”

Although some aspects felt familiar, there were still some major differences.

“The cornerstone of the fall semester was Professor Ira Harris’ Strategy & Systems class, which was time intensive and involved a lot of speaking up in class, which wasn’t something I was really accustomed to in my undergrad classes,” Davis said. “That really set the tone for what he and our other professors wanted the program to be about. With that came needing to be a lot more prepared and putting in the work outside of the class.”

While there were challenges, Davis experienced some of his favorite and most useful courses applicable to his current work today during his time at McIntire.

“Professor Felicia Marston taught my Valuation class; she’s hilarious, super smart, and really good at what she does,” Davis said. “She geared the class toward investment banking, corporate finance, and what we might experience in interviews for those fields. She really knew what people would be looking for.”

Now an Invest Banking Analyst at Stephens in Atlanta, Davis used some of the lessons learned in Marston’s class during his job recruiting process.

While the coursework helped prepare him for the professional world, so did his newfound relationships with professors.

“That was one thing that was really different—I had never had much of a relationship with any of my professors at Duke, and that was partially on me,” Davis said. “But at McIntire, I just felt like it was really important to the professors to be a part of our experience and talk about what we did outside of class. Most every class, I really enjoyed spending time and just talking to the professors. And some of them helped me for my job and interviews as well.”

Davis’ time at McIntire helped him gain the professional development and knowledge that he was looking for before entering the working world. And while he has no regrets about focusing on baseball during undergrad or the life skills he developed playing a team sport, the change of pace provided a new space for him to learn and thrive.

“Having had no real professional experience, there were a lot of times when I had no clue what I was doing in grad school,” Davis said. “But I had to get over that and keep pushing through.”

Pushing through was nothing new for Davis, considering his career as a relief pitcher and working through tough game situations on the mound. In the end, there seemed to be more similarities than differences between the game of baseball and a career in business.

“At McIntire, it was about the daily work and having tests and assignments that were a reflection of that work,” Davis said. “You have to get through the 95% of it that might be tough to get to where it all pays off.”

In the end, Davis found himself in a career that was the result of fully diving into a business education and the job recruiting process, while making strong relationships along the way.

“I had a really great group of friends at McIntire,” Davis said. “That’s the stuff that, now that I’m working, I’d really enjoy to go back to. School, plus looking for a job, can be a stressful time, but having a group of friends who are going to help you keep everything in perspective is something that I really enjoyed. At the end of the day, it all worked out, and we were all in it together.”