Mary Ottley, current M.S. in Commerce student in the Marketing & Management track, speaks with Professor Nicole Montgomery about her journey to McIntire and how she brings her research interests into the classroom. 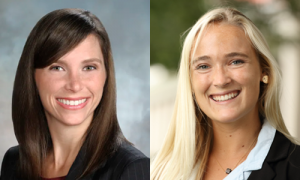 As a student in the Marketing & Management track of the M.S. in Commerce Program, I have had the pleasure of taking classes from great professors who are passionate about the content they teach. One of my professors this semester is Nicole Montgomery, Associate Professor of Commerce, who specializes in topic areas like digital marketing and consumer behavior.

Learn more about Professor Montgomery, her research, and her path to McIntire below:

Professor Montgomery got into academia in a roundabout way. When she was an undergraduate, she was very interested in queuing systems as an Operations Management major at The Ohio State University. Her first job was as a Merchandiser at Abercrombie & Fitch Co., and even though she didn’t see that as her dream job, she looks back on it with appreciation for what she learned from the role.

Two specific lessons really impacted her path to academia. First, Professor Montgomery was interested in how the company used data, and second, she loved seeing the company’s relationship with pop culture and how people related to and interacted with the company.

Another interesting aspect of Professor Montgomery’s work at Abercrombie is that during that time, an Illinois state senator launched a boycott against the company, and to Professor Montgomery’s surprise, the boycott actually led to increased popularity of the brand. She became interested in why popularity of the brand was growing despite the negative publicity. What actually happened, she realized, is that younger people started to like the brand more when they saw an adult in a position of power have a negative response to the brand. To young people, ultimately, this meant the brand was “cool.”

After this experience, Professor Montgomery contacted one of her former Marketing professors from undergrad. The professor connected her with a colleague who did work on brand information processing—how humans take in information about a brand and how it impacts decisions we make about a brand. Utilizing the connection her former professor helped her make, she started working on a research project surrounding this topic.

Through the project, Professor Montgomery realized how much she enjoyed research and the topic of information processing more broadly. She also realized that what she loves about data are the behaviors that are the driving forces behind the numbers. This realization helped Professor Montgomery discover her passion and ultimately led her to pursue a Ph.D. in Marketing from The Ohio State University.

Professor Montgomery’s research focuses on two core areas. After she graduated from graduate school, she went to teach at the College of William & Mary and began researching false memory—the idea that you can be exposed to certain kinds of information that can make you believe you had certain experiences you have never actually had.

When Professor Montgomery started working in this area, people often asked her how common it was for people to actually be exposed to information that wasn’t true. Fast forward to the era of social media and a wide selection of news outlets to gain information from, and everyone is talking about the massive problem of misinformation. Professor Montgomery has spent a lot of time looking at human and technology interactions and assessing its decision-making consequences.

For example, CEOs are much more visible to external audiences today than ever before. People know who CEOs are because the internet, and social media has made them and information about them more accessible. Professor Montgomery explained that they are the public faces of the companies in a lot of ways.

Her research in this area has focused on the challenges they face from external audiences. For instance, how do consumers’ perspectives of a CEO affect the organization? What happens when something goes wrong in a company? What are the differences between how men and women leaders deal with those challenges? And how do consumers respond, and what are the implications for the company?

Professor Montgomery leverages insights from her research to inform a lot of her teaching. When preparing to teach a class, she thinks about it from two sides: What do we know about this subject already through academic research, and what do practitioners in these fields actually do?

She is focused on integrating these two questions in order to help students make sense of the space. This mindset especially informs how she teaches the Marketing and Management track’s Digital Marketing course.

Professor Montgomery says that the industry is always changing, and the class has never been the same two years in a row. The topics and deliverables change significantly every year in order to keep up with the way that the marketing world is continuously changing.