A Conversation with David Sanger ∞ Webinar 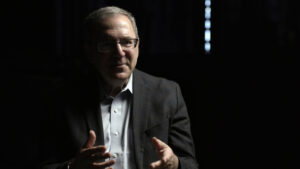 A Conversation with David Sanger, Chief Washington Correspondent for the New York Times, author of “The Perfect Weapon”

David E. Sanger is a national security correspondent for The New York Times and one of the newspaper’s senior writers. In a 38-year reporting career for NYT, he has been on three teams that have won Pulitzer Prizes, most recently in 2017 for international reporting. His newest book, “The Perfect Weapon: War, Sabotage and Fear in the Cyber Age,’’ examines the emergence of cyberconflict as the primary way large and small states are competing and undercutting each other, changing the nature of global power. In October 2020, HBO released a documentary based on the best-selling book, directed by Emmy-winning filmmaker John Maggio, featuring interviews with top military, intelligence, and political officials on the front lines of cyberterrorism.

On Wednesday, February 10, 2021, McIntire Professor & CMIT Associate Director Ryan Wright moderated a one-hour virtual Q&A discussion with Mr. Sanger and they took a deeper dive into the events covered in the book and film, the cyber landscape of the U.S., and how the pace of conflict – particularly with Russia and China – has accelerated.   A recording of their conversation is below.