Doing Business in China: A Culture. A Philosophy. And for Our Cohort, a Class!

M.S. in Global Commerce students experienced firsthand what doing business in China is like as they traveled to Shenzhen, China, during their time at Lingnan (University) College at Sun Yat-sen University. 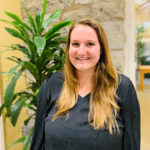 How is doing business in China different than doing business elsewhere in the world? How is it the same? What are some customs that are important when engaging in cross-cultural business? These are all questions that the M.S. in Global Commerce cohort embarked on answering with the help of Dr. Lin, our professor at Lingnan (University) College during the second part of the program—in Guangzhou, China!

As part of our “Doing Business in China” course, we traveled with Dr. Lin to the nearby city of Shenzhen to learn about and meet with five different companies. We spent two days touring the business hub, asking questions to company leaders, and consuming bubble tea (thank you to our Chinese cohort mates for introducing us about this delicious beverage)!

After an early-morning wakeup call and a relatively quiet two-hour bus ride (our cohort is very rarely quiet when spending time together), we arrived at the lobby of Accenture (埃森哲). The word “Accenture” is derived from “accent on the future,” and that’s really what we saw during our time visiting the company. Really, that’s what the entire trip felt like, coming from an American perspective—futuristic. Students tinkered with artificial intelligence and virtual reality technology, and asked questions about their business applications.

My American classmate Katie Kennamer had this to say: “I really appreciated our time at Accenture. It was amazing to see the application of developing technologies in real problem-solving scenarios. For example, AI technology. We all have a vague concept of what it is and how it can be used, but we got to see how daily videos can be used to teach a processing system to identify and classify human behaviors.” 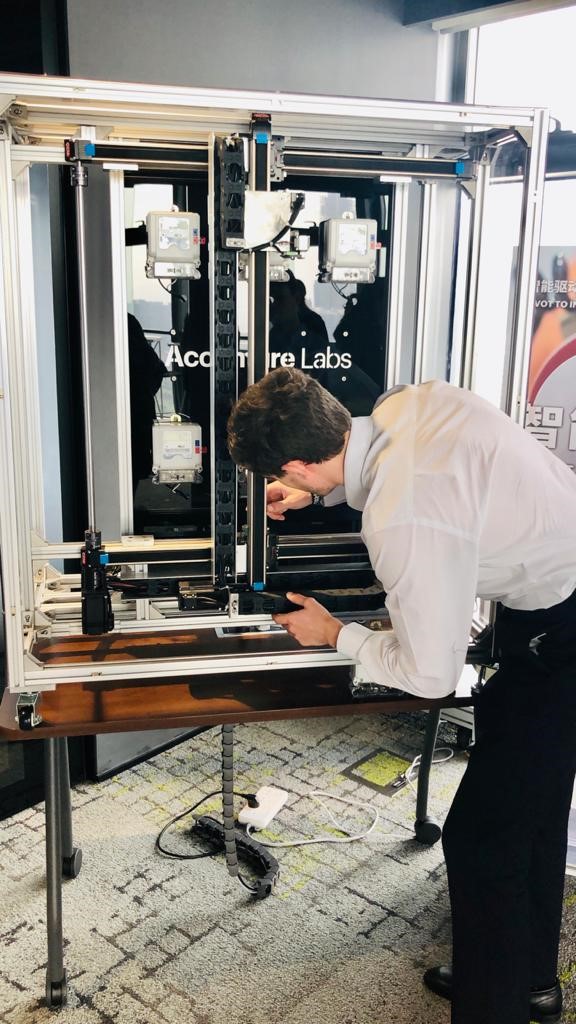 Experimenting with the futuristic AI/VR lab setup in the Accenture office.

After experimenting with some of Accenture’s models, we attended a presentation about the different projects that Accenture consults on, and specifically projects of the Chinese-facing offices. What was really cool to see were the transplants in the office—we met people who have lived in Shenzhen, China, their entire life as well as others from around the world. We even had an “it’s a small world” moment, when an employee from Connecticut made a high school connection with one of our current cohort-mates, fellow student ambassador Adam Branco! “This is the kind of contribution our degree prepares us for,” I thought to myself while networking with Accenture’s global team.

From there, we enjoyed a spicy lunch of noodles and pork, and we were on our way even further into the future. In a nearby office was WeBank (微众银行), the globe’s first completely online bank.

The company was having very important meetings the day we were there, and so we were encouraged to stay as quiet and respectful as possible. This wasn’t difficult, however, as we all walked around with our mouths and ears open—whispering question after question to the WeBank representative as he showed us the real numbers that were running on the “floor,” or office level where new products are tested and launched. We wrapped up the visit with inspiring words from the representative, encouraging us to apply to work there!

Marcus Muller, a German student in the cohort, reflected, “WeBank really impressed me by presenting their business model, which is mainly based on social network data. Creditworthiness for microloans is determined by online behavior and grounded in sophisticated algorithms. The lax local perception of data privacy gives WeBank a competitive advantage in the marketplace.” 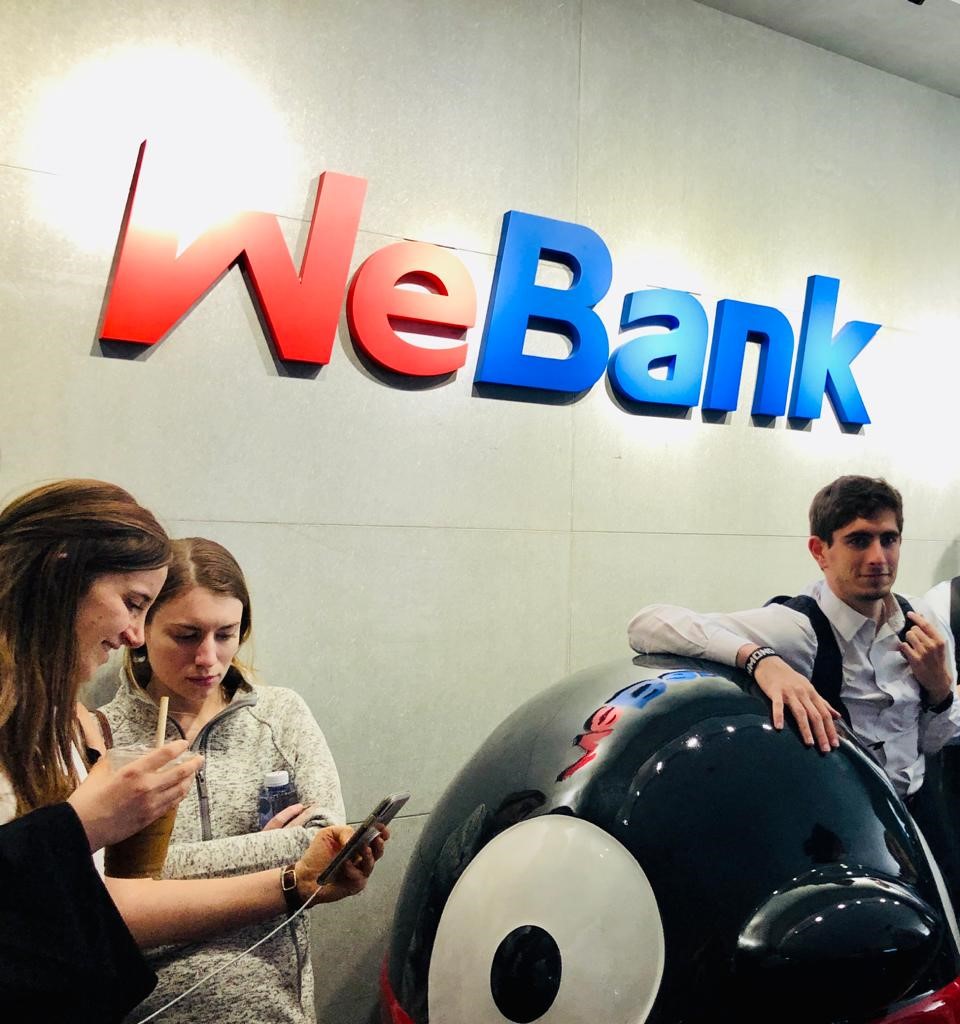 Student Alex Lucking leans against the WeBank mascot while waiting to be let onto the “floor”.

After we were done with the day’s meetings, it was time to explore Shenzhen. On everyone’s minds? Dinner! That night, we were lucky enough to visit the home of one of our classmates, Shihui Yang (a.k.a. Hazel), who is from the Shenzhen area! It was a true honor to meet her family and eat a delicious meal they prepared for us. 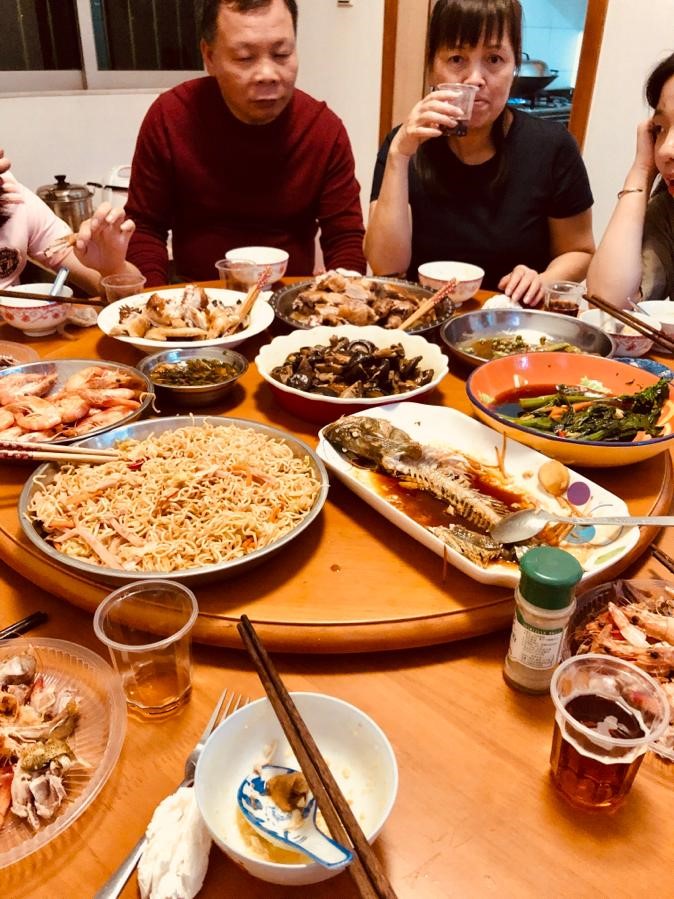 The highlight of the trip–dinner at Hazel’s house.

Day two was jam-packed! Starting with another early morning wakeup call and a breakfast of noodles and rice milk (got to love a country where noodles are breakfast, lunch, dinner, and snacks), we groggily loaded onto the bus and headed into the mountainside. Our first stop was BGI (华大基因), one of the world’s four major gene banks. “I’m proud that we got to visit one of the four gene banks in the world,” remarked Chinese student Tianni An. “After listening to the company representatives, I also started to consider to save my future baby’s stem cells, which I found out is affordable. This may save their life in the future. From this angle, I feel that gene technology can really benefit real people’s lives.” 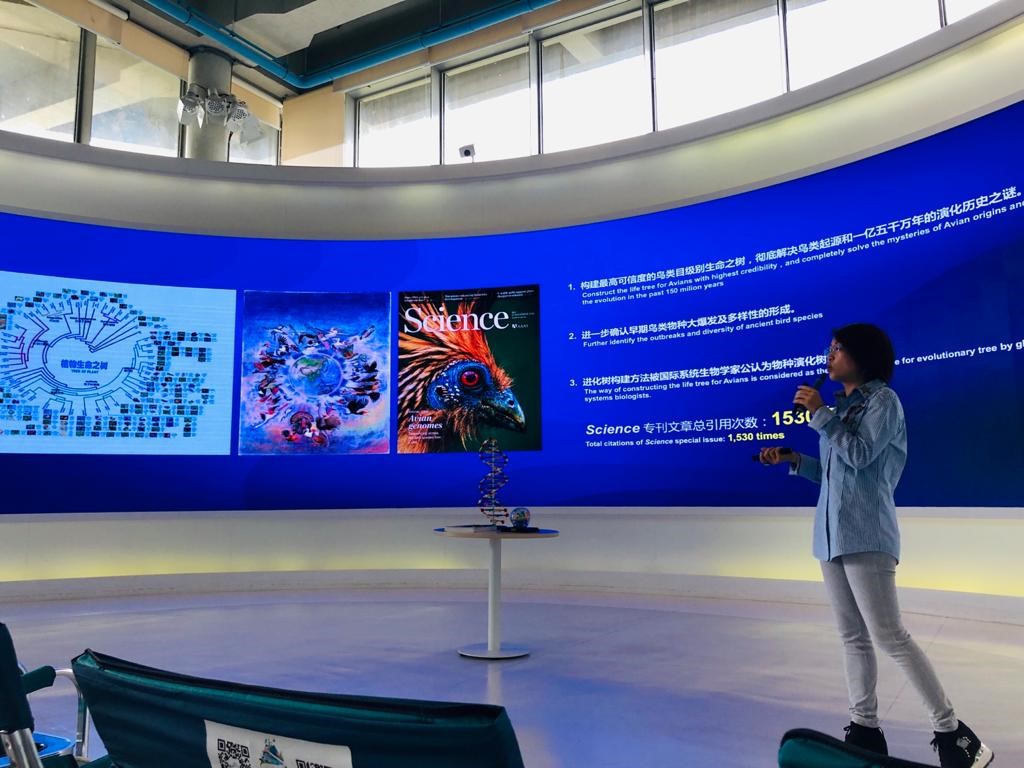 Listening to a lecture on the history and (basic) science behind gene technology – wow.

I felt like I was in the coolest science class in the world—listening to the researchers talk about DNA, bioresource conservation, and industry incubation. In effect, the work they do at the gene bank is bringing back extinct species, an absolutely mind-blowing line of their business. The center collaborates with all of the other major gene banks in the world, working together to secure scientific genomics of the future. It was honestly such an honor to be there and to see the importance of scientific innovation.

From the business perspective, the bank relies on big data in order to manage the collection and creation of genomes and DNA, and many of the automated features of gene writing and fixing are vital for the world’s success as a whole, both today and in the future. This was particularly important to note, because a gene bank isn’t the first place you would think to visit on a trip full of business students.

Afterwards, we quickly grabbed some fish and rice to-go from the employee cafeteria and headed back down the mountain in order to make our next appointment on time.

Evert Sanders, the European delegate to the cohort, summarized the visit: “It was really cool to get such an interactive experience at Tencent, where it seemed like we spent an hour in future. We drove virtual reality cars and played virtual reality games. All in all, it was very interesting to see how business is conducted by a Chinese firm, as it is very different from any business I know in The Netherlands. This so, because in The Netherlands, businesses are very much results-focused, while at Tencent the process seemed to be the focus.” 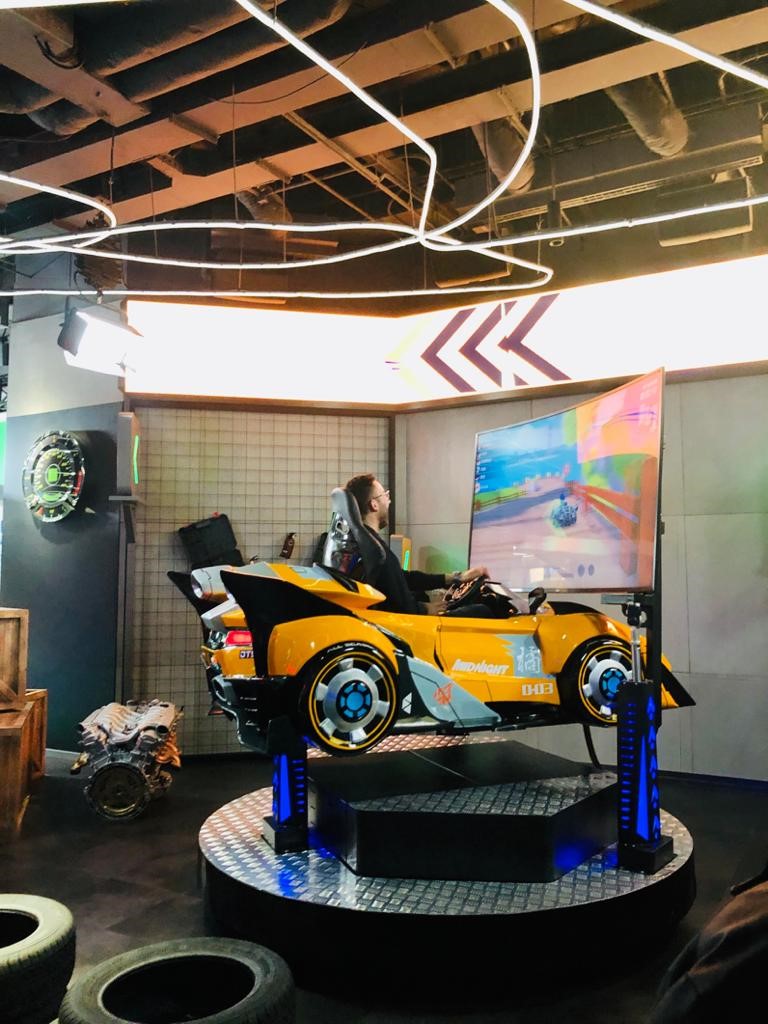 Tencent is THE business in China, and many of our classmates plan to apply to work there in the future. After weeks of setting up bank accounts, sim cards, Chinese-specific (and necessary) apps on our phones, it was incredible to see how much of our lives Tencent had a hand in.

Finally, we arrived at our last stop–Diji (大疆). Although we didn’t get to speak to an employee on the inside here, we thoroughly enjoyed running around in the park outside of the shop, playing with the company’s newest models. The drones were even programmed at one point to follow along, and members of our cohort took turns weaving through the trees trying to “trick” the drone into going the wrong direction.

Michele, a cohort member originally from Lebanon, observed the following: “While drones are a worldwide trend, visiting a Chinese manufacturer made me realize how advanced and technologically oriented the people are. For me, in general, a drone is a flying object or even a game for some. For Diji, it was an opportunity to develop and take the lead in unmanned aerial vehicles sector. The high-tech showroom and mind-blowing drone-flying demonstration opened my eyes to how innovative they are. Furthermore, they don’t plan on resting, as progress is their motto.”

The visit perfectly encapsulated our company visits into the future. All in all, it was a great time. 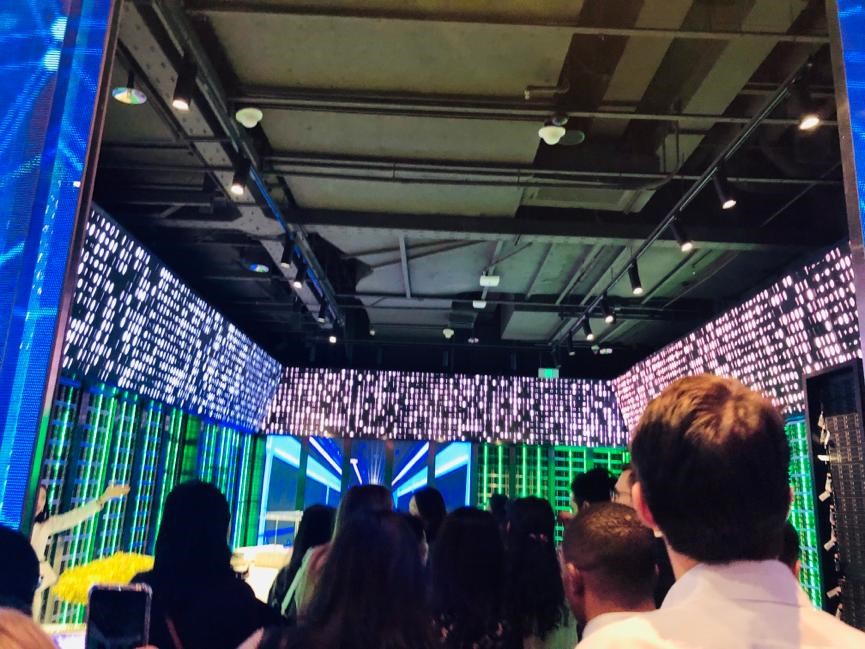 MSGC 2020 walking into the future… until next time, Shenzhen!