One of the unique features of the M.S. in Global Commerce Program is the cultural exposure that comes from having such a diverse group of students—and being within traveling distance to students’ homes at each location in the Program. Have YOU ever imagined celebrating the Chinese New Year with a local family?

Contributed by Tianni An and Emily Zapinski

One of the unique features of the M.S. in Global Commerce Program is the cultural exposure that comes from having such a diverse group of students—and being within traveling distance to students’ homes at each location in the Program. Have YOU ever imagined celebrating the Chinese New Year with a local family?

This year, American student Emily Zapinski got the chance to visit the home of Chinese student Tianni An. In today’s blog post, they take you through exactly what it’s like to bring a student home for Chinese New Year, and what it’s like to experience the celebration in an immersive way.

After they were released from classes for the start of Chinese New Year, they traveled together to Tianni’s home in Wuxi, in the Jiangsu Province. Called “Tai Lake Pearl,” the city is located in the east of China. Here are some of the traditions and activities that Tianni’s family showed Emily.

On Chinese New Year’s Eve, Emily had a dinner with Tianni’s large family. After everyone raised their glasses and said their well wishes for the new year, over 20 dishes were laid out on a rotating table to share. Emily tried many new delicious dishes. After eating, every young person received lucky money in red packets from the older family members. This was Emily’s first red packet, which she was honored to receive. 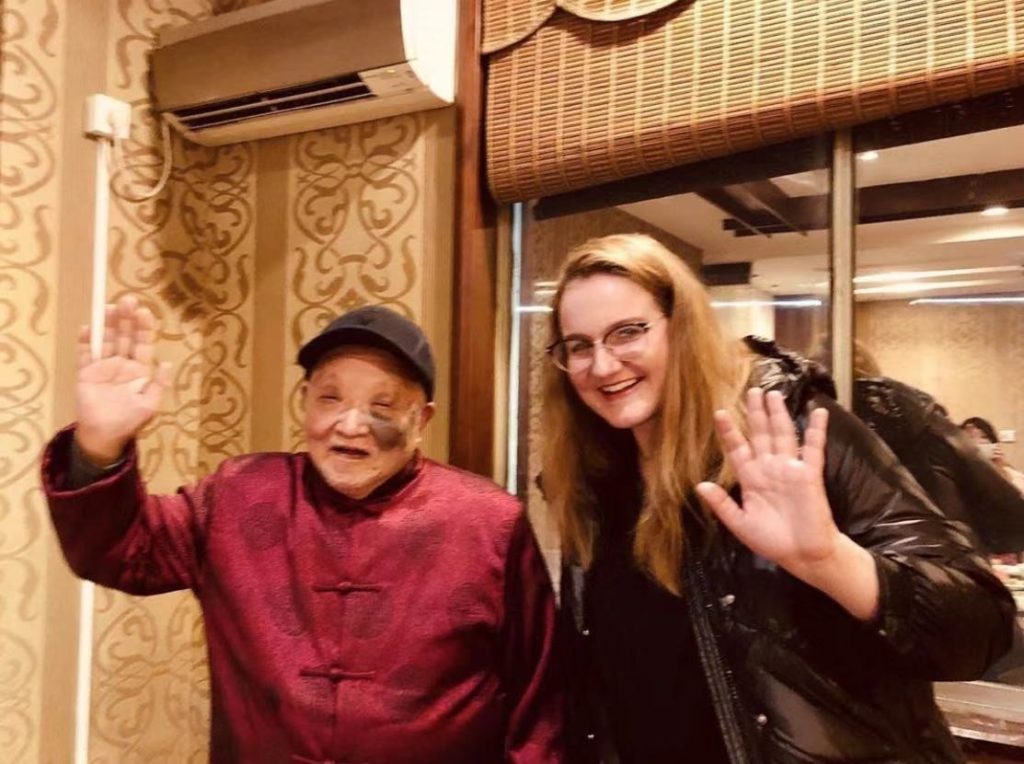 According to traditional Chinese customs, every family changes their Spring Festival Couplets on their front door leading up to the new year. For thousands of years, New Year’s scrolls were meant to drive away the monsters in China. In modern times, Spring Festival Couplets are meant to express the holiday joy and new year wishes, such as “be safe in the four seasons” and “be wealthy and healthy.” Every family ceremoniously takes off the old ones and puts on the new ones to embrace new luck. Since this is the Year of the Rat, Emily and Tianni also put on Mickey and Minnie mouse stickers on the door. 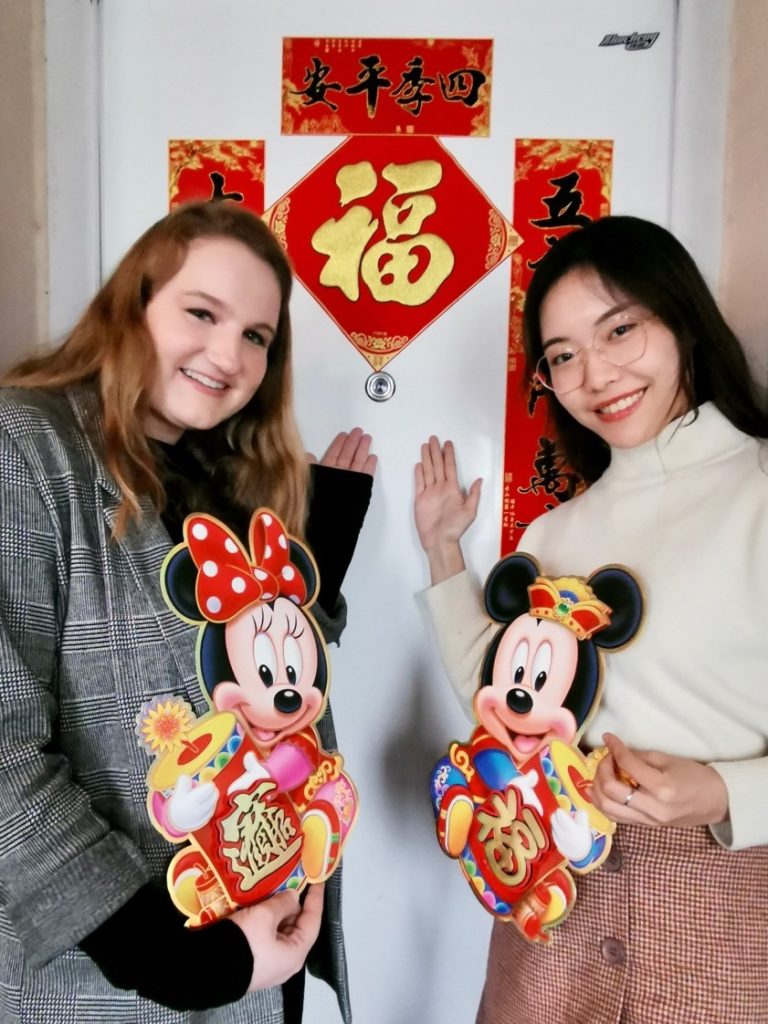 Three new Spring Festival Couplets, with the Mickey and Minnie pair picked out together with Tianni’s mom.

Emily also learned how to make dumplings with Tianni’s family, in both the southern and northern traditions. Although dumplings have different shapes, there is no wrong way to wrap them. Most important, they all taste delicious! 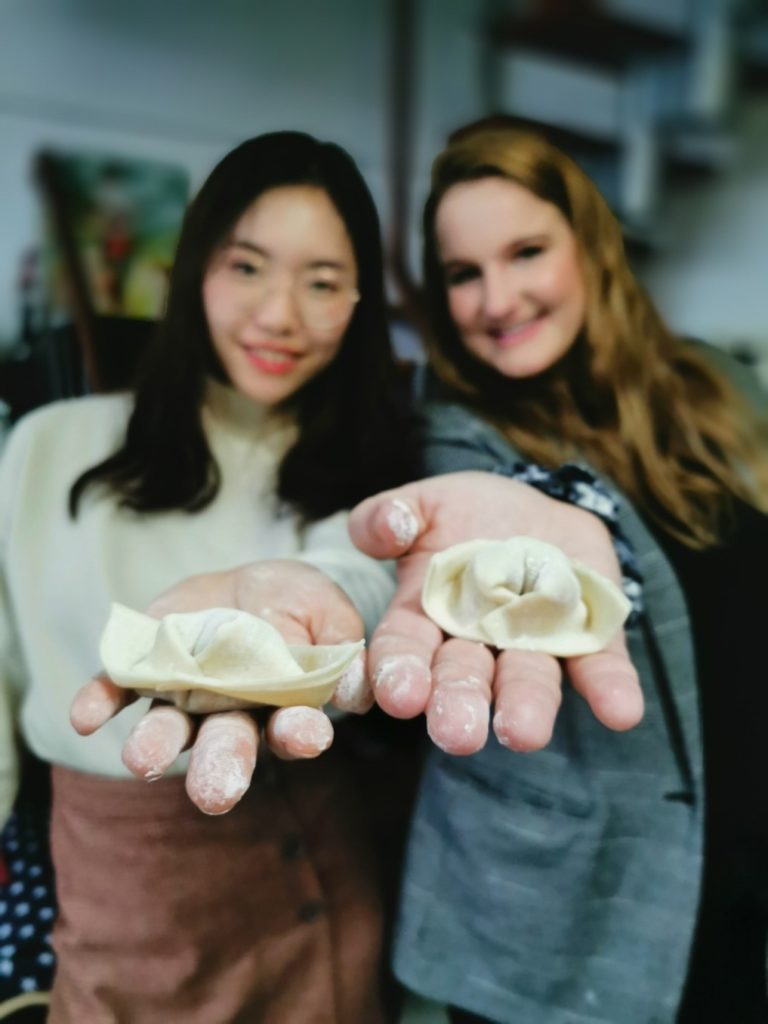 Dumplings that Tianni and Emily made together.

Red is the most popular color in China. It’s a symbol of jubilation, excitement, and peace to the Chinese people—all things that we wish upon ourselves and each other during the Chinese New Year. Wearing red has even become a cultural ritual of the holiday. On the first day of the Chinese New Year, Emily and Tianni donned some Chinese red and spent time wandering the main streets in downtown Wuxi. In addition to seeing the famous view of the downtown region from a 300-year-old bridge along the Grand Canal, Emily and Tianni also tasted a traditional sugar painting snack. They asked the creator to make them a sugar snack in the shape of a rat, since they were celebrating the Year of the Rat. 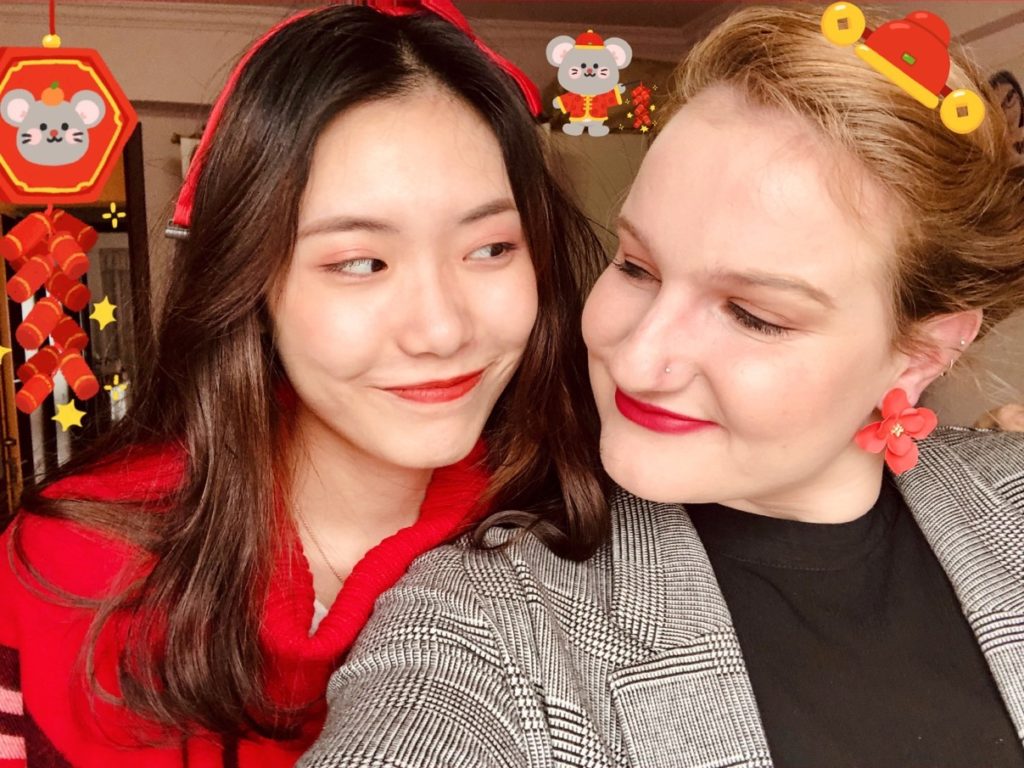 Tianni and Emily stopping to take a selfie in Wuxi in their Chinese red.

Hotpot is one of the most popular foods in China. Restaurants put two different types of sauces on the table and bring the pot to a boil, hence, a “hot pot.” Then, the family orders vegetables, meats, and other garnishes and cooks them in the broth. This integrates the flavors. However, in this specific hotpot experience, Tianni and Emily ordered food that was a bit too spicy. They had to order sodas in order to keep eating their dinner. See how Emily reacted when she had some spicy food. 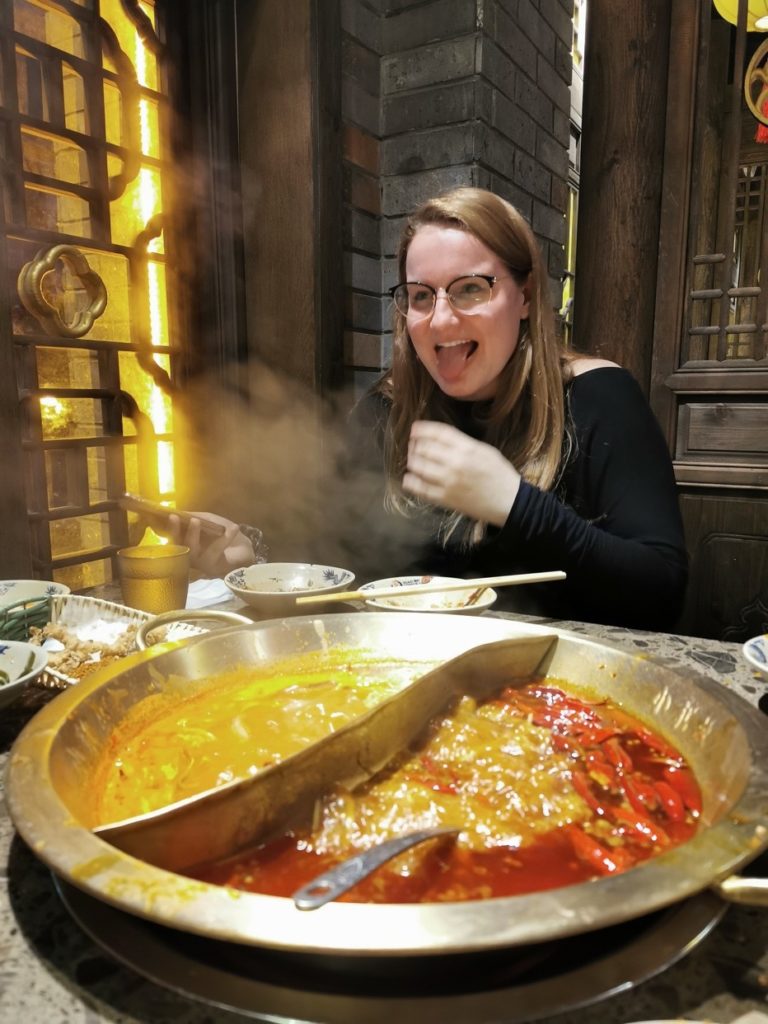 An authentic reaction to trying the spice of the hotpot.

In addition to these activities, Tianni and Emily also watched the Spring Festival Gala, which is like the New Year’s Eve Ball in NYC, walked around the Wuxi lake and fed the birds, and spent lots of time eating snacks and talking at home with Tianni’s family.

Unfortunately, the spread of the novel coronavirus affected other travel plans. Originally, the pair was going to travel together to Beijing, but all major attractions, including the Great Wall, were closed. The Chinese government issued a travel advisory and allowed for all cancellation fees to be waived. Therefore, the two enjoyed staying at home with Tianni’s family and had a good time together tasting the original flavor of Spring Festival.

Considering all of the unexpected changes, Tianni and Emily used skills necessary for any new situation: adaptability, flexibility, and resilience. Currently, Tianni is at home with her family in Wuxi, and Emily is back in the United States. Both are finishing coursework online as the situation evolves. Learn more about how UVA, Lingnan (University) College, and Esade collaborated to address the coronavirus as new developments continued to emerge. 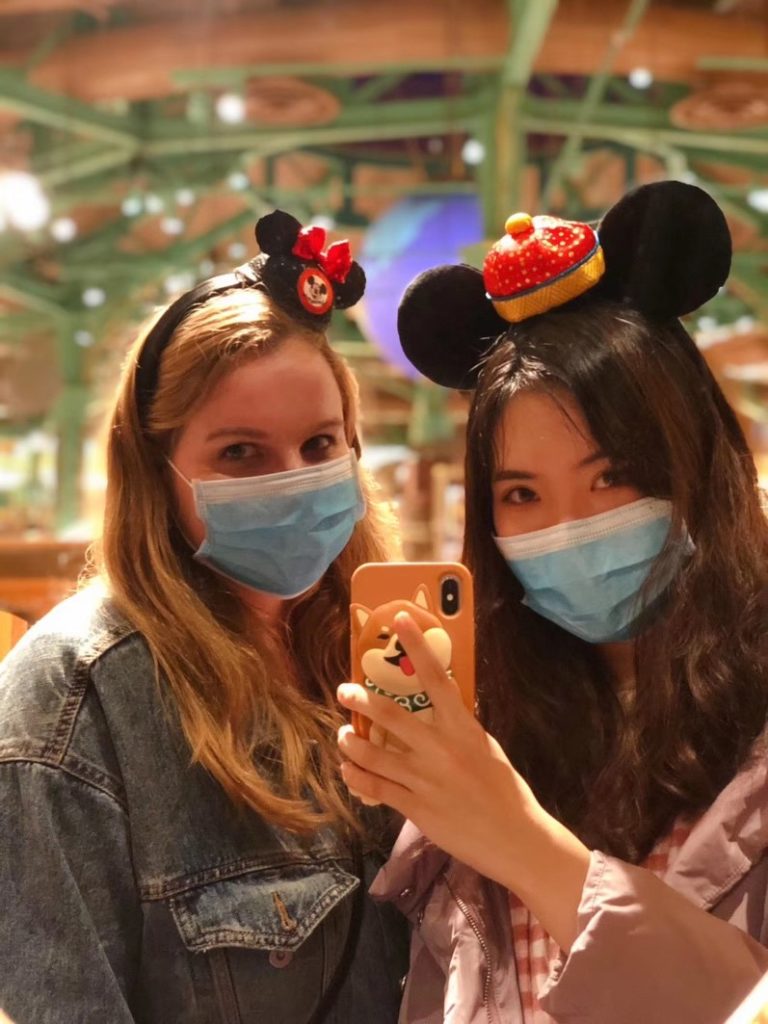 Taking precautions when traveling back to Lingnan when news of the coronavirus broke.

Get important admissions news and updates delivered straight to your inbox.