McIntire students come together to build bonds outside the classroom while enjoying the beautiful surroundings of the greater Charlottesville area. 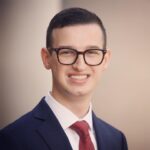 Waking up at 5:30 a.m. on a weekday during the fall semester to go hiking probably doesn’t sound ideal to some people, especially if you’re a third-year student in McIntire’s rigorous Integrated Core Experience (ICE) curriculum. Funnily enough, however, this was precisely what I found myself doing as a part of the experience.

One of the many unique things about ICE is that you meet with the same students nearly every weekday (Monday-Thursday). Students within each class (block) quickly become close-knit through activities and events that take place both in and outside of the classroom. Within each block, an elected block representative works to plan some of these activities. In my block, one of these activities was a “sunrise hike” at Humpback Rock.

I’ll admit that when an early-morning hike was first announced as a block activity, I didn’t quite know what to expect. I don’t consider myself to be a morning person, so my initial reaction wasn’t exactly to jump on the opportunity. Nonetheless, I agreed to go despite not knowing anything about Humpback Rock other than it is a place to experience “breathtaking views.”

So, at the crack of dawn, I jumped in my car and began the 40-minute drive to the starting point. Though I was first to arrive, it wasn’t long before carpools of other students in my block began showing up. Once everyone arrived at the starting point, we started our ascent.

Now for those of you who aren’t familiar with Humpback Rock, let me set some context. From where we started, the hike itself is approximately a mile long in each direction. While this might not seem like a long distance, it’s important to note that the hike isn’t necessarily considered a “beginner’s trail.” It’s a relatively steep climb of almost 800 feet to reach the top. However, doing the hike as part of an adventure with your block makes the task considerably easier to achieve since we would occasionally pause for brief breaks. 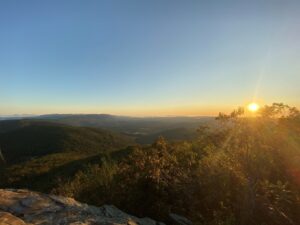 After climbing for about 35-45 minutes, we finally reached the top. Although we were beaten by a few fellow hikers who had woken up even earlier to catch the sunrise, we still managed to see phenomenal views of the sun coming up. Perhaps the best thing about the experience was bonding with fellow students in my block. And before we knew it, we’d be back in the classroom for another exciting day in ICE!