Building Bridges with Alumni at Home and Abroad

This year, I was able to connect with many esteemed and valued members of the Commerce community.

Ever since I began as Dean of McIntire on July 1 of 2020, I’ve understood how important our incredible alumni are and the integral part they play to ensure both the continued excellence of the School and the future success of our students. But, as my tenure started during the first long wave of the pandemic, it took some time before I was able to experience it firsthand. In that inaugural year, I often wondered when I would be able to fully welcome McIntire alums back to Grounds—and to meet them where they live, shape industry, drive innovation, and lead organizations in cities across the globe.

Thankfully, that all changed in 2022.

Throughout this calendar year, I was able to connect with many esteemed and valued members of the Commerce community. In March, I hit the road for the first time, heading to nearby Richmond with Professors Bryan Lewis, Eric Martin, and Roger Martin, as well as our new Executive Director of Graduate Marketing & Admissions, Judi Byers. We were able to share our “Building Our Next Century” plans for the McIntire Expansion and new programmatic developments. It was the first of many great events that have proven to be essential to reconnecting with alumni, parents, and friends.

On the Road Again

In early May, more receptions took place. I had the pleasure of meeting with members of our community in Washington, DC, and New York. At the Yale Club of New York, I shared our plans to advance initiatives for the School’s second century with alumni and parents, and a week later at Sands Capital in Arlington, where we were hosted by Perry Williams (McIntire ’94), I detailed our ambitions with our NoVA-based alums and friends. 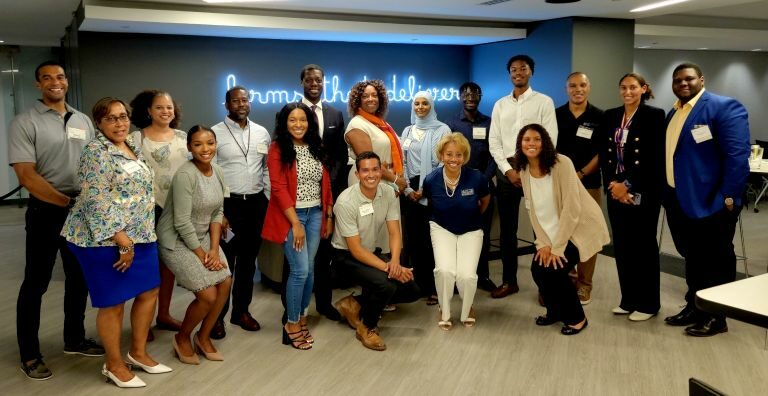 During late July, I excitedly returned to our nation’s capital for a Black Student & Alumni Networking Reception held at the headquarters of tech firm Clutch and hosted by its Head of Operations Ryan Stevens (McIntire ’12). A couple of days later, I headed back to Manhattan’s Yale Club to celebrate a class reunion with Professor David Smith and former students of his Corporate Restructuring & Distressed Investing course on its 10-year anniversary. That evening, David and I had the opportunity to dine with New York-based McIntire board members as well. And in September, I was thrilled to head south to visit with alumni and friends at a reception in Atlanta, where Mandy Knox Sweeney (McIntire ’01) hosted us at Druid Hills Golf Club. 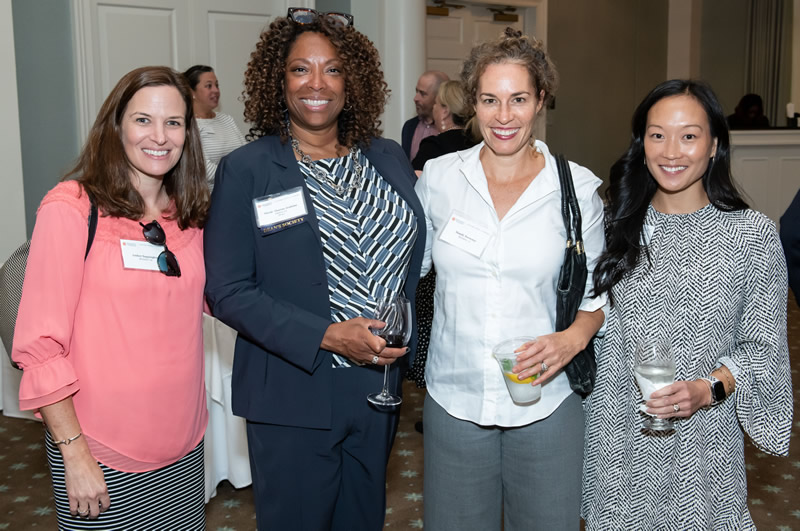 I knew it was imperative that I get out to the West Coast. In mid-October, I met with our intrepid alumni working on inventive endeavors in Los Angeles and the San Francisco Bay Area. The week kicked off with an unforgettable happy hour inside of a Santa Monica Airport hangar, where Patrick Pettay (McIntire ’99) welcomed us at the offices of pioneering transportation venture lab UP.Labs. In Northern California, Glen (McIntire ’93) and Amy Kacher hosted a luncheon in Palo Alto, where tech and business served as the hot topic of conversation. The trip wrapped with a warmhearted reception at JPMorgan Chase in San Francisco. Peter Engel (McIntire ’88) gave me the chance to connect with members of our Bay Area Commerce community during an intimate, memorable reception. 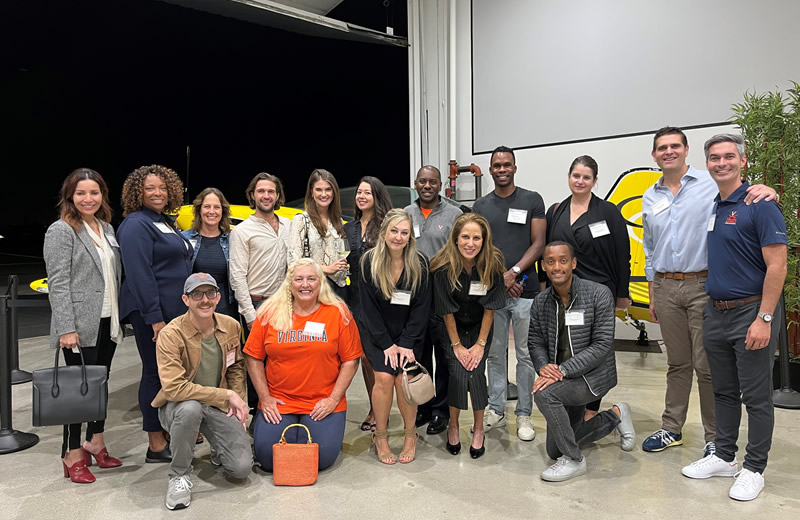 Dean Jenkins and alumni and friends enjoyed a memorable happy hour at the Santa Monica Airport.

As the pandemic waned and travel restrictions continued to ease, I enthusiastically embarked on my first visit outside of the U.S.—and with good reason: to celebrate the Class of ’22 and the COVID-delayed Class of ’20 graduations from the Global 3/M.S. in Global Commerce Program at our partner school Esade. In addition to speaking at the ceremony held at their Barcelona, Spain campus, I enjoyed insightful conversations with Esade leadership, which included Dean Josep Franch. 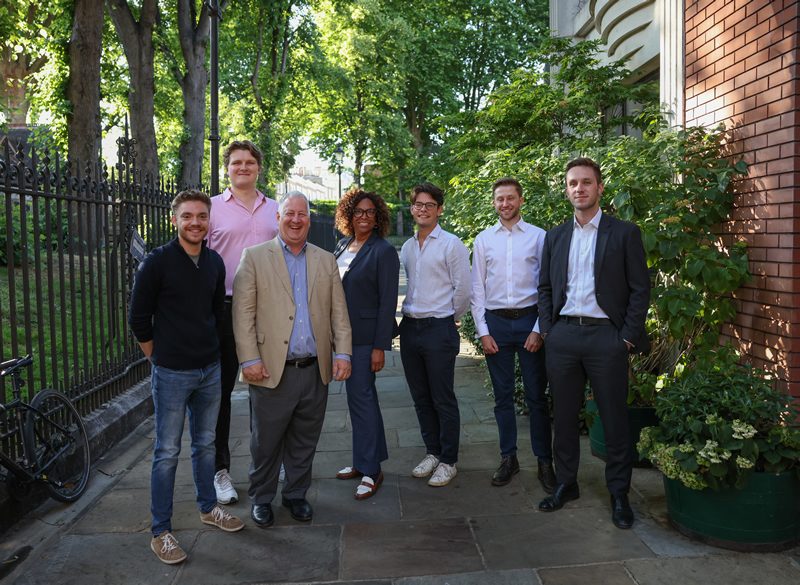 A few days later, I landed in the U.K. to get better acquainted with one of the largest UVA communities outside of the U.S. At a Commerce School Centennial reception in London, I met with our talented Lenox-Conyngham Scholars studying at Trinity College, Cambridge, had engaging conversations with members of McIntire’s Global Advisory Board, and got to know many UVA and McIntire alumni and parents. One special moment came when touring the London Business School facilities: The experience was insightful and inspirational, as back home, the McIntire Expansion Project was being realized more fully by the day.

Despite the invaluable observations and unmistakable feelings that come with travel and connecting face to face with alumni in their corners of the world, some of the most memorable encounters I had this year with alumni, parents, and friends took place right here at UVA.

One such event was literally years in the making: The Centennial festivities that took place on April 1 united a long list of significant alumni and members of the Commerce School and the University in Old Cabell Hall for a dynamic program of memories and plans for the future. Following the rousing series of speakers, the all-McIntire community lunch of board members, alumni, students, faculty, and staff followed, before the spring board meetings occurred in the afternoon. When people returned to RRH that night, it was transformed for a beautiful and festive event recognizing the occasion. 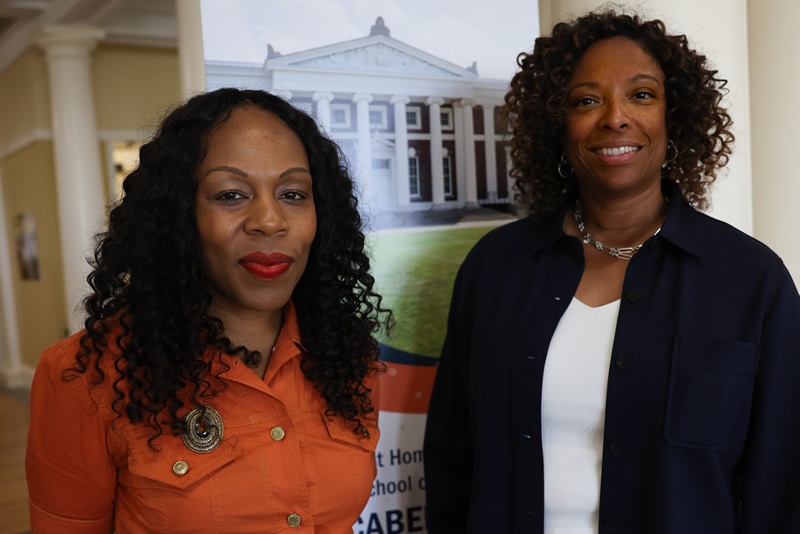 Charlotte Ashamu, granddaughter of Charlotte Hanley Scott, and Dean Jenkins honored Scott at a bench dedication with family, friends, and alumni in September.

By late May, graduation came, and I was honored to meet with so many proud parents on the Lawn as I wished our Commerce grads well. In the fall, I was proud to take part in a bench dedication honoring the memory of Professor Charlotte Hanley Scott, the first African American woman appointed with tenure at UVA. Two weeks later, on Sept. 16, we welcomed UVA President Jim Ryan, UVA Rector Whittington Clement, Chris (McIntire ’88) and Carrie Shumway, Virginia First Lady Suzanne Youngkin, and the entire University community for the groundbreaking ceremony of Shumway Hall—where we will provide students with the necessary space and resources for generations to come. 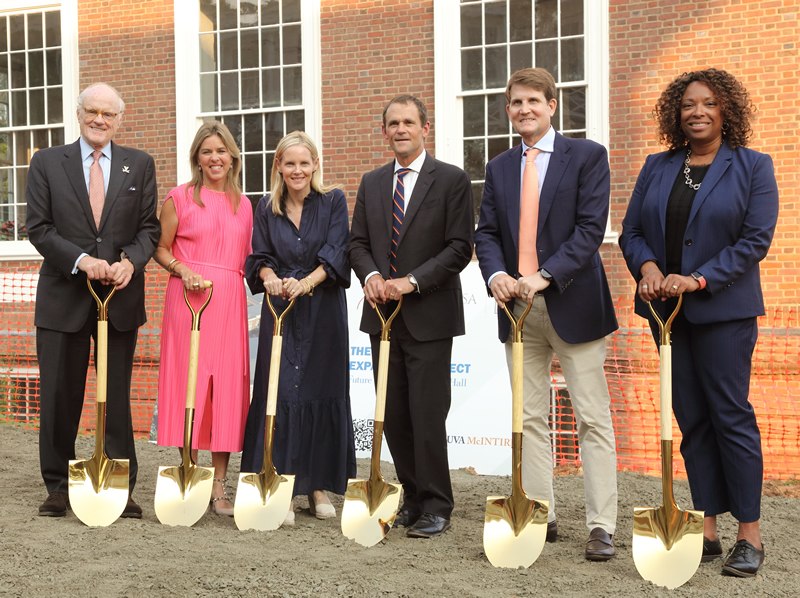 Of course, playing several rounds of golf with alumni, hosting tailgates at Pavilion V, attending sporting events (soccer, football, basketball, baseball, and volleyball), joining in the spirit of the Halloween season with the return of trick-or-treating on the Lawn, and ringing in the holiday season with the Lighting of the Lawn all provided plenty of moments to initiate and renew relationships with members of the McIntire and University communities. So while I’m looking forward to a restful holiday with my family, I’m already anticipating many upcoming visits with our outstanding McIntire alumni throughout the U.S. and around the world in 2023.

All the best to you and your family, and I hope to see you in the New Year.